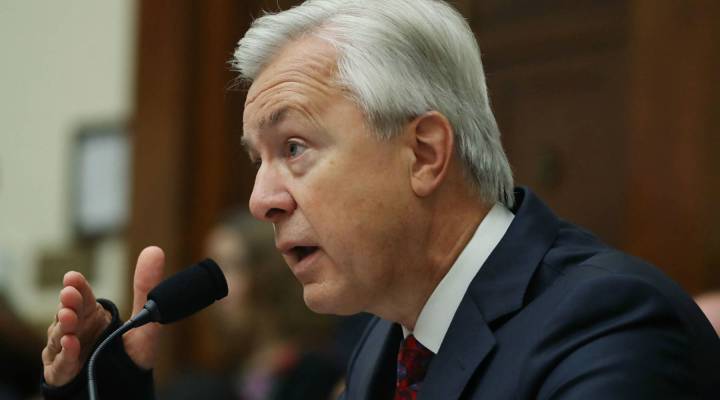 Wells Fargo is still under fire after a tough visit to Capitol Hill for CEO John Stumpf on Thursday.

Stumpf was berated by members of the House Financial Services Committee for more than four hours in a hearing that addressed a growing scandal over Wells Fargo branch bankers opening unauthorized accounts in order to keep up with sales quotas.

“Our people did not do what was right,” Stumpf admitted to the committee. But his testimony fell short of admitting personal guilt or responsibility, focusing instead on the bad actors he said have since been fired for their transgressions — some 5,300 people in total, according to Wells Fargo.

But the committee questioned why investors weren’t informed over the years that the company knew about the scandal. Stumpf testified that workers were fired as the company investigated from 2011-2013, but he said these fraudulent accounts only made up one in 200 accounts opened — an amount he called “immaterial” when it comes to the company’s obligation to report to shareholders.

“If that’s your benchmark,then a lot of very important very serious problems would be classified as nonmaterial,” said Saule Omarova, a law professor at Cornell. She said securities law doesn’t set a numeric benchmark for what is material, precisely because even a small problem numerically can be a big problem for a company’s culture or reputation.

She also pointed out that leaning on proportions to determine the significance of a problem like this could set up certain banks as inherently too big to be monitored — the same number of fake transactions at a smaller bank would clearly be “material.” But a high volume of transactions shouldn’t excuse unethical behavior, especially if it reflects negatively on leadership or the company culture.

Wells Fargo has already agreed to $185 million in fines over this, and clawed back millions in bonuses from Stumpf and former head of community banking Carrie Tolstedt. It’s still not clear how many customers actually lost money as a result of these transactions, but Wells Fargo has committed to pay back anyone who was charged a fee related to an unauthorized account. Stumpf also announced Thursday that sales goals for front-line workers will go away effective this week.

But Congress and the public seem unlikely to let go of the scandal too quickly. Some Democrats on Capitol Hill are asking the Securities and Exchange Commission to investigate. And many have questioned whether the Consumer Financial Protection Bureau did enough to intervene. The overall vibe: Heads must roll.