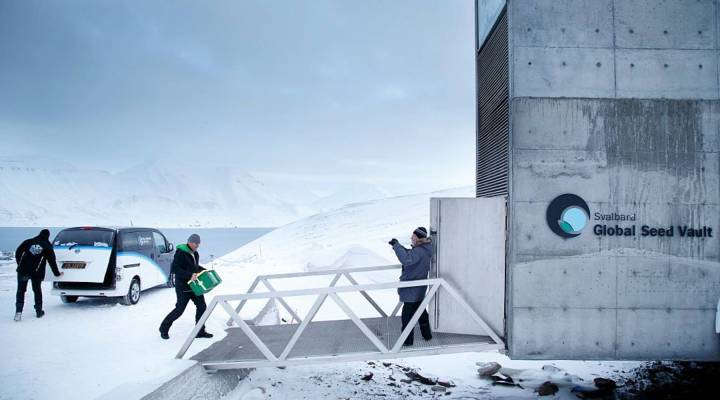 One solution for food security: putting seeds in a vault

One solution for food security: putting seeds in a vault

As climates change around the world and the need for food constantly increases, agricultural scientists have created a vault to store seeds for various crops from around the world. In the event of a natural disaster or war that would create a food shortage, these seed vaults could possibly help those in need of seeds to grow crops. Agriculturalist Cary Fowler is the Senior Advisor of the Global Crop Diversity Trust, an international nonprofit organization which works to preserve crop diversity to prevent global food insecurity.

Host Kai Ryssdal talked with Fowler on his new book “Seeds on Ice: Svalbard and the Global Seed Vault.”

On the Svalbard Global Seed Vault:

One of the things we figured out pretty early on was that we were building a facility, almost unlike any facility for any purpose anywhere in the world, in that, we were building a facility that was essentially meant to last forever.  And we realized that, to be sustainable, we had to be very pragmatic, very practical, and cheap.  Because if it was going to be expensive to run, it probably wasn’t going to be sustainable. So, it’s not an antiseptic laboratory with people running around in white coats. It’s a very bare-bones facility that just does its job and does it very economically.

On where these seeds come from:

They mostly come from our national seedbank, which is in Fort Collins, Colorado, but originally these seeds were sourced from all over the world. So, if you look at where the seeds in the seed vault have come from, I think they’ve come from something like 232 different countries.

On Syria’s recent withdrawal from the vault:

Well, it was an international center that used to be headquartered right outside of Aleppo, Syria. It was a really important center—is a really important research facility, which had a major collection of wheat, barley, lentils, chickpeas, a wonderful little crop that I love called grass pea, but when the war came to Syria, the researchers had to abandon the site and they moved their facilities to Morocco and Lebanon. So, last September they needed their seed back. I think in that one repatriation event, we really paid for the costs for constructing this facility and it showed its value down the road.

Listen to the full interview by clicking the audio player above.