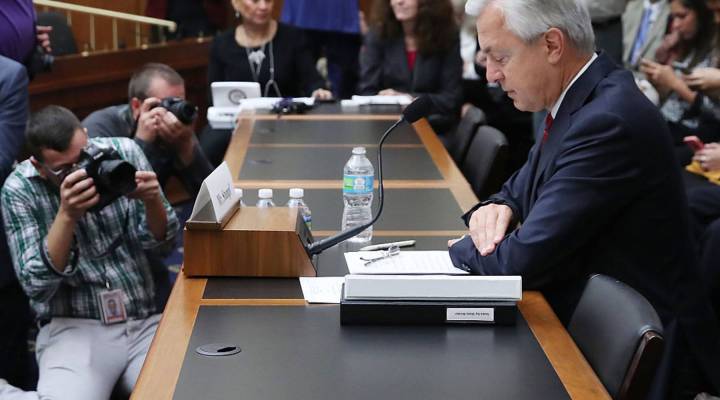 Wells Fargo CEO John Stumpf faced hours of scathing questions from members of the House Financial Services Committee Thursday in a hearing about the bank’s use of sales quotas and history of opening unauthorized accounts. In an attempt to keep up with rigorous sales goals set by senior management, thousands of Wells Fargo employees opened as many as two million bank accounts or lines of credit without customers’ permission, over many years.

Although the problem with fraudulent accounts has been known to the bank since at least 2011, the scandal has only come to a head this month. Just within the past week, Wells Fargo has been hit with multiple new lawsuits, Stumpf and another executive have forfeited tens of millions of dollars in bonuses, and the state government of California has suspended its dealings with the bank for at least year.

Stumpf’s opening testimony included a defense of the practice of cross-selling, or the practice of trying to get customers to sign up for multiple accounts. Former Wells Fargo employees say cross-selling quotas as well as daily individual sales goals led to a high-pressure environment in which workers, fearful of losing their jobs, bent the rules, pressured customers and even secretly opened accounts that would later be closed. These accounts could end up costing customers unexpected fees, or affecting their credit scores later.

At issue in today’s hearing was the fact that Wells Fargo was aware of the sham accounts for years, and says it fired 5,300 branch workers, including managers. But throughout those years, the company continued to tout the success of its sales goals and cross-selling strategy to stockholders. While Stumpf says Wells Fargo fired only workers who were found participating in unethical practices, employees allege many were fired for not meeting quotas or for whistleblowing.

Committee Chair Jeb Hensarling, a Republican, grilled Stumpf about the fact that the company has paid fines and settlements (including a recent $185 million settlement with federal and state parties), but no senior managers have been held accountable.

“Please tell me that these fines are not just a cost of doing business for Wells Fargo,” said Hensarling.

Stumpf stumbled: “It’s … it’s not a cost of doing business. This is a serious trust issue with our customer.”

Representative Brad Sherman (D-CA) asked Stumpf whether the company will suspend its arbitration clauses to allow customers who may have paid unwanted fees or fines on the false accounts to take them to court.

“If they want their day in court, are you doing to screw them out of that?” Sherman asked.

“I believe in arbitration,” said Stumpf.

Sherman and a series of other angry congressmen kept Stumpf on the defensive for upwards of two hours.

“You were firing the highest number of people in 2013, but bragging about the numbers of accounts you’d opened in 2014,” Sherman said.

Still, Stumpf continued to maintain that the fraudulent accounts and shady sales practices were the responsibility of individuals who have since been held accountable, not the result of company culture.

“We have a culture based on ethics and doing what’s right,” said Stumpf. “Not everyone does that … but I stand with the people who are doing the right thing, who honor our culture and our ethics.”

Earlier in September, the company announced it would stop using sales goals as of January 2017. In Thursday morning’s hearing, Stumpf said the sales goals will go away by the end of the week.