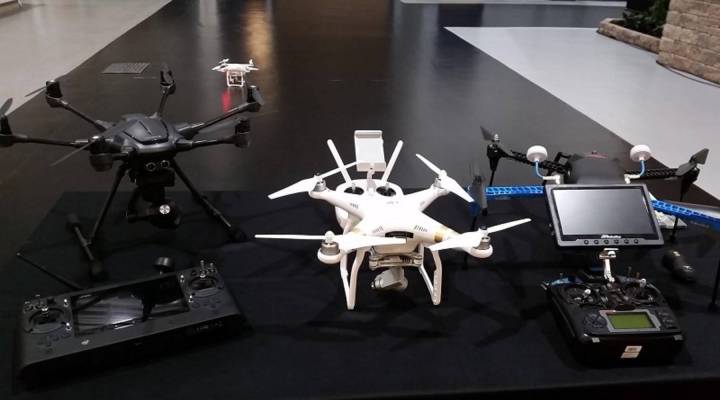 COPY
The insurance company Travelers is considering giving this assortment of drones to insurance adjusters for use in the field. Patrick Skahill

The insurance company Travelers is considering giving this assortment of drones to insurance adjusters for use in the field. Patrick Skahill
Listen Now

Claim University is a giant warehouse operated by the insurance company Travelers, where insurance adjusters go to train. Inside are dinged-up cars, damaged store fronts, and big model houses.

And while you might not think of insurance adjusters as risk takers, Patrick Gee, who works on auto and property claims for Travelers, said they can be.

“Whenever you climb ladders or you get up on a roof, despite well-trained claim professionals with safety standards, there’s always a risk of an accident occurring,” Gee said.

Which gets us to a buzzing noise that accompanied us while we talked. It was a tiny drone — that hovered over our heads,  zipped over the model house’s shingled roof, and snapped photos of damage.

At Claim University in Windsor, Conn., Travelers tests drones, and adjusters are trained on how to use them in the field to assist in processing insurance claims.

New rules making it easier for companies to fly small unmanned aircraft — or drones — could mean big benefits for agriculture, the real estate business or for movie makers looking to get that perfect aerial shot. But drones also have insurance adjusters interested in new possibilities.

“Often if we need to evaluate a roof that’s really complicated and very, very steep,” Gee said, “we might need to bring in an outside expert that’s specially trained with all the harnesses and rigging to evaluate damage on steep roofs.”

But now that Federal Aviation Administration regulations have been loosened, Gee said a certified adjuster could stay off that roof entirely — flying a drone to get all the pictures they need on their first visit.

“It will be something that — most field people will have a drone in their trunk or their back pocket,” said Jay Jablonski with Hartford Steam Boiler, an insurance company that among other things,  not surprisingly, covers steam boilers — sometimes several stories tall.

“We’re looking at can we actually use drones inside the boiler to get some of the information, so we don’t necessarily have to set up the scaffolding inside of a boiler,” Jablonski said.

Tom Karol, general counsel at the National Association of Mutual Insurance Companies, said the use of drones could extend beyond individual claims. Think large-scale disasters.

Back at the training site at Travelers, Patrick Gee said as fall weather brings rain, hail or possibly a hurricane, hundreds of adjusters will ramp up their training to become certified in the hope of using more drones — and fewer ladders — while out taking claims.