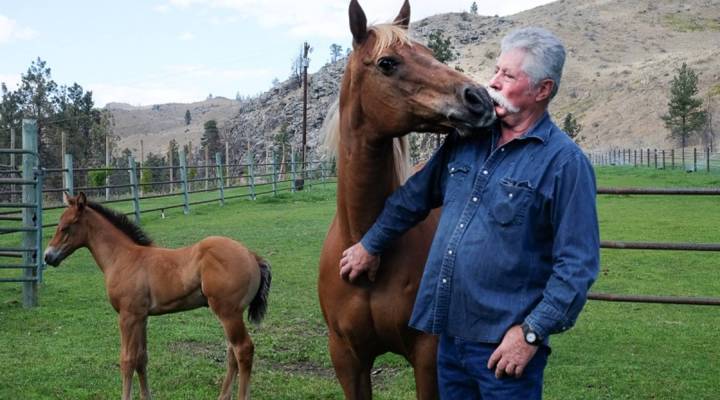 COPY
Chuck Kisner gives his brood mare and month-old colt some love. Kisner lost nearly everything but his house, his horses and cattle in the last two years of fire in the Methow Valley. Anna King/Northwest News Network

Chuck Kisner gives his brood mare and month-old colt some love. Kisner lost nearly everything but his house, his horses and cattle in the last two years of fire in the Methow Valley. Anna King/Northwest News Network
Listen Now

After two years of some of the worst fires and smoke the Northwest has ever seen, this year Washington state’s Methow Valley got a break. But even without fires this summer, dozens of businesses didn’t make it through. And the fires still throw a long shadow.

Kisner says he spent years building up this operation. Then, in 2014, came the Carlton Complex fire.

“And then watch it burn to the ground in one day, ” Kisner said. “And then you ask yourself, ‘Do you got it in you to go again?’”

Last year, from the other side, came the Chelan Complex fire. Kisner’s  just tired of fire and all the hassle of insurance — and all that can’t be claimed. Like some of his tools and tractor equipment.

Now, many insurance companies are making individual home inspections and are demanding fire improvements from homeowners. Deductibles cost more. And some residents in the area are having difficulty getting insured at all.

In nearby Winthrop, Kathleen Jardin could use some more customers for the vacation homes and cabins she rents out. Only about 85 percent of the places she manages were booked at the height of her summer season.

“People are asking us about air quality, if we have smoke in the air, if we have fires,” Jardin said. “So they are definitely remembering.”

Some regulars didn’t return. And she says in town, residents are still on edge.

“Every time a fire truck goes by we all just hold our breath and watch and see what direction it goes,” she said.

The fires even haunt the still, green waters of Prescott Lake, that seems from the memory of  all that fire, smoke and mud.

Leaf Seaburg started a pro fly fishing guide service in 2014, just months before the first big fire hit. His family’s home burned down. Then the next year, his guiding business was crushed by even more fires.

Leaf Seaburg  out fishing with his boys. His family lost the good part of two years’ income and their home to fires.

This evening, he’s out on a large aluminum boat with his two fish-crazy boys — Leo, 9, and Finley, 7.

The boys were just as excited to land  a catch, screaming “Fish on!” each time the rods dipped.

Two years of fire washed silt and mud and houses into rivers here — smothering many of the fish. Seaburg and other volunteers hauled out about 55,000 pounds of stuff.

“We’re getting to low water, and I’m noticing some stuff we missed,” he said. “Tires and pipes and stuff like that. We’ll be going back.”

Back down valley, rancher Kisner and his farming neighbors say they’re better prepared now. They’ve bought their own water trucks, and fire equipment. They’ve sort of formed their own unofficial fire department to help each other when fire comes again. Kisner said some more of his neighbors will probably still leave, but he’s not about to.

“I always did like the mountains,” Kisner said. “And I like cattle, and it’s a pretty good place to be. So I reckon I’ll just stay here.”

Stay here,  in the Methow Valley,  where the wild balsamroot and lupine have come back, but rust colored flame retardant still stains mailboxes.