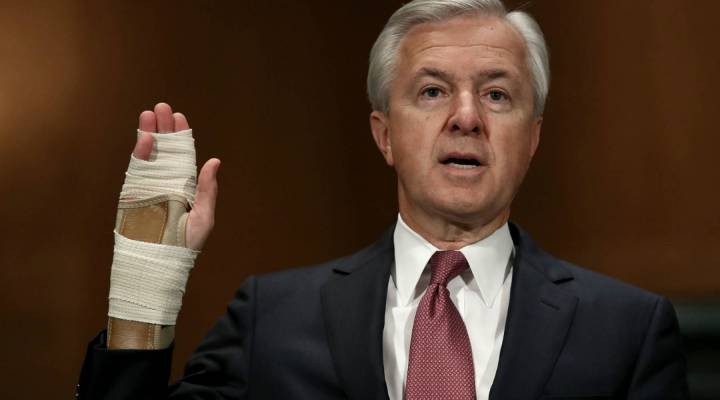 COPY
Wells Fargo CEO John Stumpf is sworn in prior to testifying before the Senate Banking, Housing and Urban Affairs Committee in Washington, D.C. on Sept. 20.  Win McNamee/Getty Images

Wells Fargo CEO John Stumpf is sworn in prior to testifying before the Senate Banking, Housing and Urban Affairs Committee in Washington, D.C. on Sept. 20.  Win McNamee/Getty Images
Listen Now

Wells Fargo’s board of directors is asking for its money back following the false account scandal at the bank.

Under pressure to cross-sell banking products to customers, thousands of bank workers opened as many as 2 million accounts or lines of credit in customers’ names without their permission. The practices lasted for many years, and workers have described constant pressure to open new accounts coupled with retaliation if they didn’t succeed. Customers, meanwhile, were pressured into getting new products, and in some cases had their information used in secret by employees attempting to meet quotas.

Now the company has announced CEO John Stumpf will forfeit $41 million worth of shares in a move that’s known as a clawback. Stumpf’s salary is also on hold while the independent directors on the board investigate.

Wells Fargo finished up its own internal investigation in 2015 and says it fired 5,300 workers, but the company was in the hot seat this month after the Consumer Financial Protection Bureau announced a $185 million settlement over the scandal. No one at the executive level had been held individually accountable, and some had received sizeable bonuses in part based on the success of the cross-selling strategy.

The settlement brought renewed attention to the fact that no executives had been held accountable, said professor Divesh Sharma at Kennesaw State University in Georgia.

“There’s a lot of pressure, not only from the media but from Congress and the senators,” he said.

A senate hearing last week focused heavily on how executives will pay for this, and tomorrow, Stumpf goes in front of the House Financial Services Committee.

On top of that, former workers filed a federal class-action suit Monday, the second lawsuit filed this week, alleging many were fired for not participating in the false account scam or for whistleblowing.

In a statement on its website, Wells Fargo also said the executive in charge of community banking, Carrie Tolstedt, will lose her job with no severance or retirement, and return $19 million worth of shares. She was already planning to retire in December, but before Tuesday, had not been punished for her role in the scandal.

It’s one of the largest uses of the expanded clawback clauses required by Dodd-Frank reforms; while the clawback rules haven’t actually gone into effect yet, many companies have added or expanded their clawback clauses already.

Wells Fargo’s lead independent director, Stephen Sanger, said in a statement, “we are committed to ensuring that all aspects of the Company’s business are conducted with integrity, transparency, and oversight.”