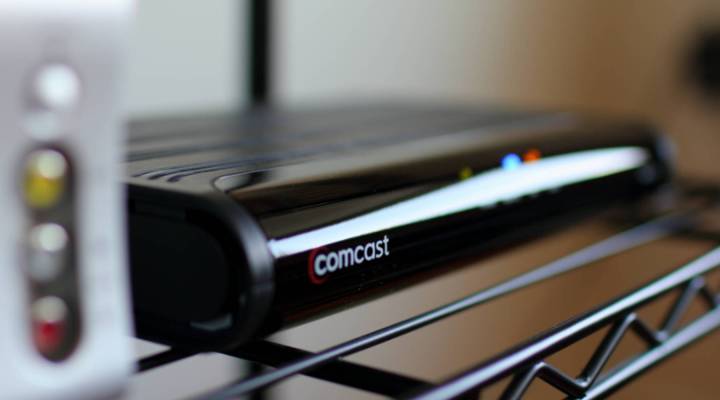 COPY
The FCC will vote Thursday on the future of TV set-top boxes. Mr.TinDC/Flickr

The FCC will vote Thursday on the future of TV set-top boxes. Mr.TinDC/Flickr
Listen Now

Update: As of Thursday, September 29, the FCC has indefinitely postponed its plans to vote on this proposal.

The Federal Communications Commission is holding a vote Thursday about getting rid of cable set-top boxes — those generic, clunky boxes currently costing you $230 for the privilege of watching TV.

Tom Wheeler, the chairman of the FCC, has instead been pushing a plan that would allow cable subscribers to get all those shows through an app.

A slam dunk of an idea if ever there was one, right?  Yeah, not so fast.

The proposal would require cable companies to offer a free app allowing customers to access programming from their devices, including smart TVs, tablets, smartphones, etc.

But, that’s not as simple as it sounds, said Congressman Tony Cárdenas, a Democrat from California.

“The basic issue, not complicated. How to get it done, very complicated,” Cárdenas said.

Cárdenas is one of 64 members of Congress who sent a letter to Wheeler, raising concerns that the app ruling could upend complex and competitive licensing agreements.

“It’s copyright, it’s intellectual property, it’s who gets to be allowed to unlock someone’s information,” he said.

Cárdenas also questioned whether the FCC has the jurisdiction to mandate these agreements.

“The FCC is getting a little bit too involved in the licensing scheme here, ” she said.

Rosenworcel is a Democrat whose vote is needed for the measure’s passage since the two Republican commissioners are expected to oppose it.

“This isn’t a la carte, this isn’t breaking up the cable bundle, or anything like that. This is just saying that whatever the existing bundle is, people should access it on devices they might already have,” Bergmayer said.

Even if the proposal passes, Bergmayer said it could still be two years out until compliance kicks in.