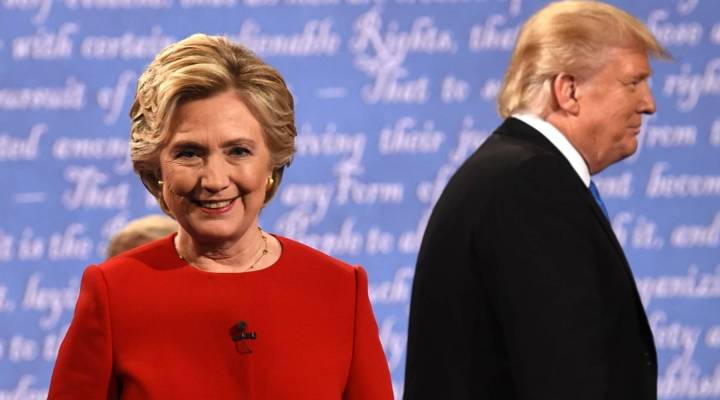 During Monday night’s debate, Donald Trump reminded us that  lowering the corporate tax rate is central to his plan to increase jobs.

“All you have to do is take a look at Carrier air conditioning in Indianapolis. They left — fired 1,400 people. They’re going to Mexico. So many hundreds and hundreds of companies are doing this,” he said in his opening statement.

“We cannot let it happen. Under my plan, I’ll be reducing taxes tremendously, from 35 percent to 15 percent for companies, small and big businesses. That’s going to be a job creator like we haven’t seen since Ronald Reagan. It’s going to be a beautiful thing to watch.”

But a 2013 study says there is no link between lower corporate tax rates and job creation.

Trump’s plan relies on corporations investing their profits in labor and new facilities, but doesn’t include any measures to hold them to that promise, and recent patterns show companies doing something quite different. Since 2004, corporations have been boosting their profiles and shareholder dividends by spending 54 percent of their profits buying back their own stock, according to the Harvard Business Review.

If the carrot of Trump’s plan for companies is lowering the corporate tax rate, the stick is stiff tariffs — in the past he’s suggested 35 and 45 percent — on foreign-made products being sold in U.S. markets.

That jibes with Trump’s general anti-trade stance. But unlike lowering the corporate tax rate, it does not sit well with Republicans in Congress and others — the center-right research group American Action Forum estimates tariffs on goods from China and Mexico would be passed on to consumers to the tune of $250 billion.

Some Democrats, like President Barack Obama, agree with Trump on lowering the corporate tax rate. In his most recent budget, Obama proposed a rate of 28 percent. The idea is that eventually all the revenue from profits being held overseas —  $2.1 trillion — would come back into the country.

For this, ending deferral is key, said Robert C. Pozen, a senior nonresident fellow at the Brookings Institute. Deferral is the option companies have of avoiding  taxes on foreign profits until they are brought back into the country.

Hillary Clinton countered Trump on the debate stage with an appeal for profit-sharing models and “closing corporate loopholes.” On her website, Clinton addresses deferment by proposing an “exit tax” on companies that want to take their headquarters overseas. She also wants to bar mergers with smaller foreign companies that allow U.S. companies to file their taxes overseas. In her plan, foreign merger partners would have to be the same size or larger.