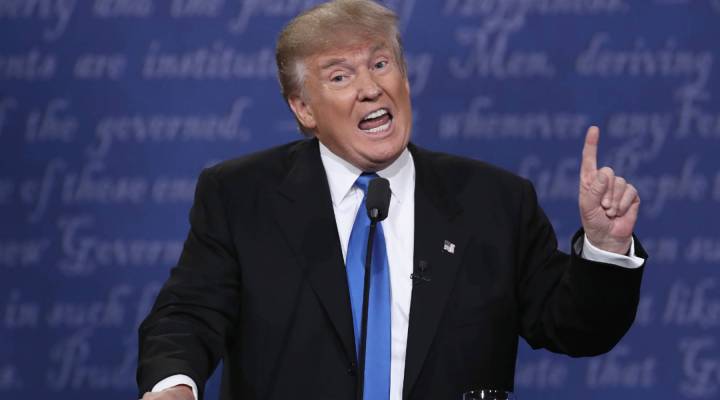 There was lots of hype beforehand about how last night’s presidential debate could be among the most-watched in history, and a money maker for the networks showing it.

It was indeed a unique performance: Pundits are commenting that Donald Trump was unprepared and Hillary Clinton perhaps even overprepared. It’s true that Clinton’s responses remained focused and detailed, while Trump’s were often rambling and rife with basic factual error.

But Lili Loofbourow, culture critic at The Week, asks us to consider Trump as a master of reality TV. She wrote before the debate that he “ has refined misdirection into a potent political strategy.”

In a post-debate interview with Marketplace, she explained one of his most common rhetorical moves: “meflection: a combination of sort of narcissistic reflection and deflection.”

Here’s a classic Trump “meflection” from Tuesday’s debate: After Trump was pushed on his judgment about the Iraq war, he denied supporting the war, despite an extensive public record of support. Rather than address the inconsistency, he responded: “Well, I have much better judgment than she does. I also have a much temperament than she has, you know?”

The comment about his own temperament produced audible laughs from the audience.

Another name for a Trump trope, courtesy of Loofbourow: “Midasing, like King Midas. Which is a separate, but related tendency to kind of compulsively insert irrelevant praise for things that he’s associated with, as if they were kind of elevated by being connected to him.”

An example of that: Trump talking about the banks where his money resides. “I could give you a list of banks, these are very fine institutions, very fine banks…I could do that very quickly,” he said.

Loofbourow also coined “Prince Georging” and “gobbing.” You can read more of her analysis here. The point is, Trump is changing the game when it comes to campaign rhetoric, creating a mash-up of entertainment, “reality” and politics.

Meanwhile, Clinton’s debate performance leaned on some more traditional political rhetoric: zingers and catchphrases like “Trumped up, trickle down.”

She also beat Donald Trump to a slightly more 21st-century move when she instructed audiences early in the debate to head to her website for live debate fact-checking.

“And take a look at mine also,” Trump chimed in.

Finally, Clinton was able to just sit back for parts of the event: using silence, composure and body language rhetorically. At one point, she audibly reacted following an angry Trump rant: “Wooo! OK.” The crowd (and Twitter) loved it.

At times the Trump side of the debate devolved into even more basic reality TV storylines — for example, the feud. Trump has a longstanding one with Rosie O’Donnell.

“Somebody who’s been very vicious to me Rosie O’Donnell, I said very tough things to her and I think everybody would agree that she deserves it and nobody feels sorry for her,” he said, responding to Clinton’s accusations that he has called women pigs, slobs and dogs.

Loofbourow said being off the cuff or trafficking in entertainment tropes is tricky for Clinton — and for women in the public eye in general. She argues that while reality TV reverts to and upholds gender norms, Clinton as presidential candidate is expected to appear both relaxed and entirely composed, never sloppy or off-script.

Meanwhile, Trump’s off-the-cuff style appeals to both his base and the cameras.

“People love him for that, because it feels so wonderfully unfiltered, and people are tired of filters,” Loofbourow said. But she said there’s a dark side to the appeal of the unfiltered.

“We’re in a moment when we’re so pessimistic about human nature that the only behaviors we think are authentic are the ones that are pretty terrible,” she said.

We may crave entertainment that paints itself as filter-free and authentic, but we’ll find out in November whether voters want a president with no filter. And Trump with no filter didn’t land quite so successfully on a presidential debate stage. On Tuesday morning the hashtag #TrumpWon was trending, but many of the tweets were jokes.