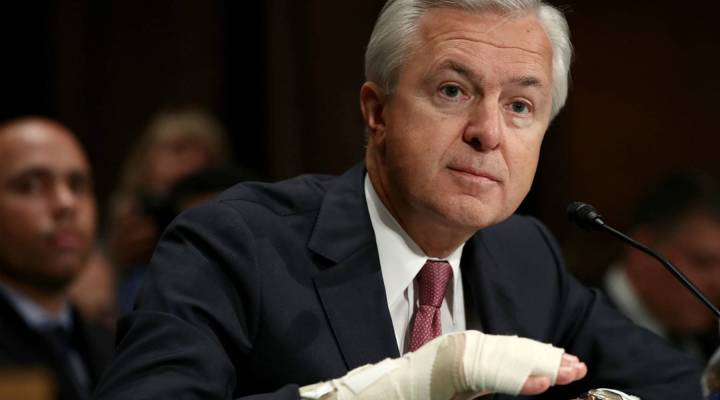 Wells Fargo is neck-deep in a scandal over fraudulent accounts: Over several years, thousands of Wells Fargo employees opened millions of accounts in customers’ names, without their permission. That was a response to a push for branch workers to meet stringent sales goals, signing up each customer for multiple accounts in a move known as cross-selling.

On Tuesday, Wells Fargo Chief Executive John Stumpf got the run-around on Capitol Hill from a group of senators, including Sen. Elizabeth Warren (D-Mass.).

“You should resign,” she told Stumpf, suggesting also that executives in charge of the company’s community banking division should pay back bonuses received while the false account practices were underway. Sen. Warren drew on several years worth of earnings reports in which cross-selling and getting customers to open multiple accounts was touted as a successful business strategy.

“Do you know how much money, how much value your stock holdings in Wells Fargo gained while this scam was underway?” she asked.

“Well first of all, it was not a scam, and cross-sell is a way of deepening relationships…” Stumpf began.

Warren interrupted him: “We’ve been through this Mr. Stumpf, I asked you a very simple question,” and proceeded to read the numbers publicly before the Senate Banking Committee.

That scene has gone a little viral since Tuesday morning, with lots of customers and potential customers sharing video of Stumpf’s stumble.

Wells Fargo has been slow to publicly take responsibility, perhaps hoping the scandal would fade a bit more quietly. The company wrapped up its own internal investigation in 2015 and fired 5,300 lower-level workers and branch managers, but the apologizing hasn’t come until really recently after a settlement with federal regulators and the anticipated grilling from a bipartisan group of senators.

The company as of last week said it will do away with individual sales goals by January 2017. Otherwise, it’s not clear whether Stumpf will take any of Warren’s advice on sweeping remedies.

But Einstein said it could still be possible for the company to address the reputational damage. “It’s never too late,” she said, pointing to the example of Nike after the sweatshop scandals of the 1990s. Over many years, the company changed some of its practices and became much more transparent, eventually improving its reputation.

Wells Fargo does have some apologetic tweets up on its Twitter account, but Einstein said it will take much, much more than that.

We’re committed to rebuilding trust with our customers and the public. https://t.co/asQjncyzbA