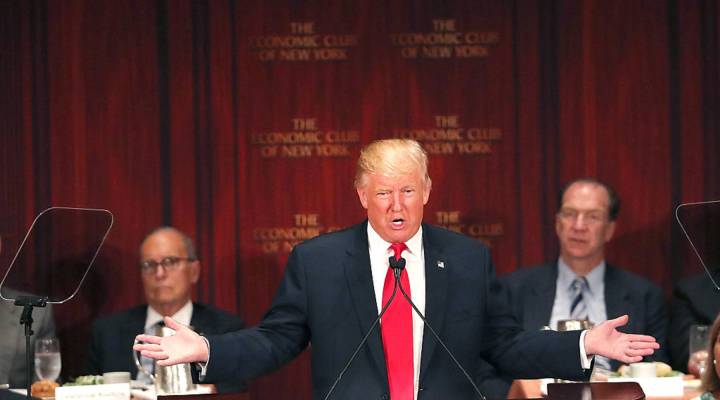 Right now our economy is growing at about 2 percent a year. Donald Trump said he would rev up growth to as much as 4 percent a year. And he said that would create as many as 25 million new jobs over the next decade.

“It’ll be very hard to get to 25 million jobs,” said Douglas Holtz-Eakin, a Republican economist who served as economic adviser in John McCain’s presidential campaign.

Holtz-Eakin agreed with Trump’s goal of faster economic growth. But, he said, Trump’s numbers? They don’t add up.

“The only way to actually create and fill 25 million jobs would be to have more immigration, and that doesn’t appear to be in his sweet spot,” he concluded.

Holtz-Eakin said there just aren’t enough people in the U.S. to fill 25 million jobs. The last time there were? When the huge baby boom generation was in its prime working years back in the ’90s. Now, they’re reaching retirement age. Labor economist Stephen Rose, who worked in President Bill Clinton’s labor department, said the boomer generation is passing through our economy like a pig through a python.

“There certainly is a demographic factor,”he said. “Especially the baby boomers — the pig in the python moving through, and now they’re on the other end.”

So, in today’s economy? Trump’s plan seems impossible without an economic miracle.

“Maybe if every single person went out and bought a cheap new car,” said Jared Bernstein, who was an economic adviser for Vice President Joe Biden. “That might get you there. But that means everybody has to buy a car. And by the way, it has to be an American car.”

Bernstein said we’d all have to buy that new car every year to keep the economy white hot.