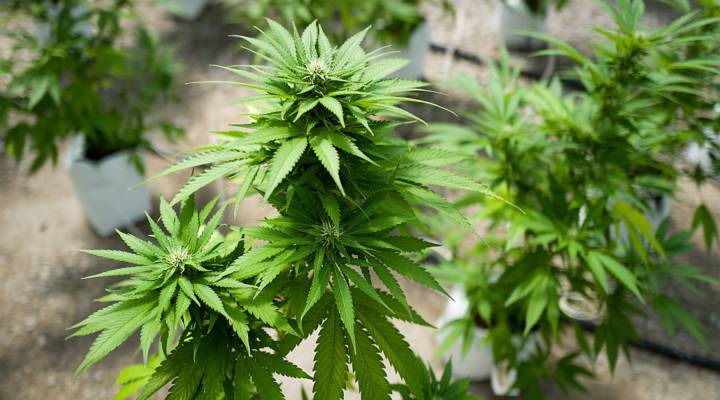 This November, nine states will consider ballot measures related to marijuana. The big one is California, where voters could make pot legal for recreational use. Considering that the Golden State’s economy is around the sixth biggest in the world, the move could be the tipping point for legitimizing the cannabis market.

As weed has gone more mainstream, it’s attracted more conventional investors. Some of them could be found at the recent Cannabis World Congress & Business Expo in Los Angeles.

At the convention center, nobody was smoking ganja. If there was any smell in the air, it was the scent of money.
“It’s just a fascinating time and place to be,” said Al Vaks, who came from San Francisco looking for business opportunities for himself and his partners. “It’s like being in the Gold Rush.”

That’s a drop in the bucket compared with the kind of money pouring into the pot industry.

Steve Gormley is CEO of Seventh Point – a private equity firm that invests in legal medical marijuana companies in California. So far, the firm has raised $10 million.

Gormley said he and most of his investors don’t consume the wacky-tobaccy. “I would concede that, like many Americans, I did some research in college. It’s not something I do today.”

He said straight-laced business types are lining up to invest before pot is completely legalized. “Imagine what it was like for Seagram, or Joe Kennedy, or other entrepreneurs investing in the alcohol business three to five years before Prohibition was repealed,” he said.

“A lot of people on Wall Street, a lot of professional investors, will wake up on November 9 realizing that they are two years behind in terms of understanding the industry and how to invest in it,” said Brendan Kennedy, CEO at Privateer Holdings, a Seattle-based private equity holding company that owns and operates marijuana-related companies.

Privateer has invested in a Bob Marley brand of pot and a kind of cannabis encyclopedia called Leafly.

So far, Privateer has raised more than $100 million. A good chunk of that came from Founder’s Fund, which is backed by billionaire Pay-Pal co-founder Peter Thiel.

Mainstream corporations are already investing.  Scotts Miracle-Gro has been buying companies that support marijuana farmers – such as lighting and hydroponics stores—through its subsidiary Hawthorne Gardening.

The company declined an interview request, but its CEO has said publicly that the company plans to invest about half a billion dollars in the industry.

Along with their big money, the corporate players bring a style that’s radically different from the counter culture of the industry’s founding fathers.

One of the Old School pioneers is Michael Straumietis, who is known as Big Mike. His extravagant parties at what he calls his ‘marijuana mansion’ in the Hollywood Hills have made him something of a legend.

Michael Straumietis, a marijuana entrepreneur known as “Big Mike”, seen standing in front of his “marijuana mansion” in the Hollywood Hills.

Big Mike is one of the cannabis industry’s most successful businessmen. He’s the CEO of Advanced Nutrients – a marijuana fertilizer that he says has $90 million in annual sales.

He recognizes that corporate and private equity money is inevitable and may even be good for the industry. But Big Mike expects that progress will come at the expense of the early risk-takers.

“It’s almost like you invented something and you’re holding it in your hand and some big bully comes along and takes it out of your hand and says, ‘Thank you very much for all your hard work,’” he said.

He said many of the industry’s original entrepreneurs don’t have the skills to compete.

“The little store owner – the hydroponic store owner – is going to be put out of business by national chains,” he said. “It just is. Either that, or you get your game together and you start having the business practices and start doing it the same way as the big boys do.”

The same thing applies to new investors expecting to get rich quick.

“The idea that this is just going to be easy money is just dead wrong,” said Tom Adams, principal analyst at BDS Analytics.

Competition has had a significant impact on pot prices.

“We’re already seeing in Colorado, the prices on pounds plummeting,” Adams said. “And the other legal states, same thing. The margins are going to get squeezed in a big way in this business.”

Investors lured by Gold Rush fever could see their dreams of a pot payday go up in smoke.