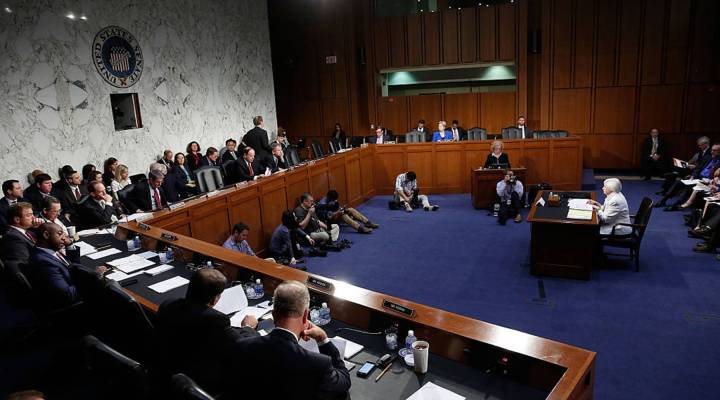 Fed governors and presidents have been popping up like Whack-a-Moles, offering their thoughts about whether we should be talking about rate hikes or not. Gov. Lael Brainard warned against moving too quickly; Atlanta Fed President Dennis Lockhart said there’s a strong case for having a discussion about raising rates this year; Minneapolis Fed President Neil Kashkari said he saw no urgency.

Markets have followed suit — down, then up as they reacted to various signals about whether or not the central bank is ready to hike rates.

Donald Trump weighed in by saying Fed Chair Janet Yellen should be “ashamed of herself” for keeping rates low. Jamie Dimon, the JPMorgan Chase CEO, suggested that the Fed just get it over with, noting that a likely one-quarter percent hike is “just a drop in the bucket.”

There is an emerging consensus among central banks worldwide that at a minimum, their policy tools are at the end of their capabilities and that directionally the next action will be to tighten.

“Language from central bankers in the U.S. has been drifting ever so slightly in the direction of raising interest rates,” said Richard Dekaser, corporate economist for Wells Fargo & Co.

With economic signals mixed, the question of when to do this is up in the air. Whenever they decide to do it, the issue is how to make it minimally disruptive.

“That’s the big question they’re wrestling with right now,” said Bryan Whalen, a portfolio manager at TCW. “Are borrowers prepared for higher interest rates? In our opinion, many are not,” he said, adding that in the investment-grade corporate bond market, companies are at all-time historic highs of debt to earnings. “You have excessively high levels of debt at a period where we may be entering higher rates.”

He said return to normal rates is going to be disruptive no matter what. The dollar will go up, earnings could fall.

“They’ve really they’ve made their own bed,” Whalen said.

But others say it’s doable. The Fed just needs to hold everyone’s hand.

“There are no guarantees, but there are some things [Fed officials] can do,” said Dekaser. “They can clarify their guidance, they can communicate to us more frequently and more clearly as to what conditions would warrant interest rate hikes.”

Also: pick the right time. Bob Murphy, professor of economics at Boston College, said that the Fed has to be sure that its policy will be sustained. “The Fed doesn’t want to be in the situation of last December of moving and then suddenly having to go on hold,” he said.