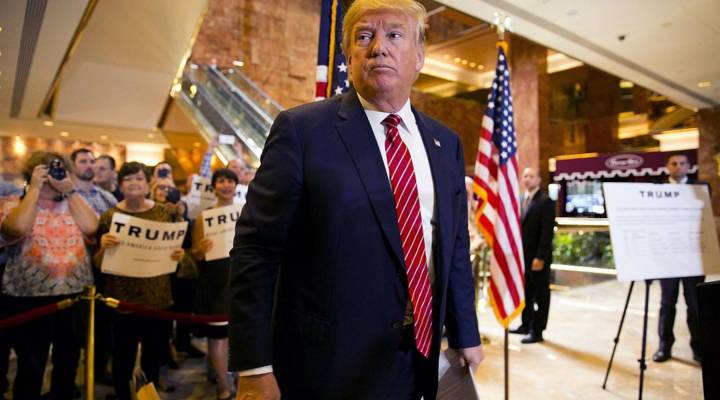 We have, here in the U.S., a fairly long precedent going back to the early 1970s that candidates running for president will release their tax returns.

We do this because, as Richard Nixon put it, “People have got to know whether or not their president is a crook.”

The Donald Trump campaign has refused thus far to release his tax returns, citing an IRS audit, but at this point in the campaign many people both on the inside and outside of his campaign are saying that he won’t make the returns public.

One thing we do know is that Trump’s tax return is a massive document, several feet high and chock full of details on over 500 separate LLC’s and holding companies.

“Five hundred LLCs is extreme, even for billionaires. That’s a large number of entities and a very complicated structure,” said Steve Rosenthal, a tax attorney and senior fellow at the Urban Institute-Brookings Tax Policy Center.

Rosenthal noted that seeing the tax returns would provide a lot of valuable insights for voters, such as “How much debt does he have?” or “Does he view taxes as a sport, or shared responsibility?”

With more traditional politicians, releasing tax returns has become a way of fact-checking whether a candidate’s personal financial life matches their campaign rhetoric. In the case of Donald Trump, the heart of his campaign platform basically amounts to that fact that that he’s really rich and good at building things.

In this case however, voters are going to have to take his word for it, absent the tax returns.

For instance, Trump regularly brags about how much his hotels and golf courses are worth, but when it comes to paying property taxes, he’s been known to change his tune.

Take, for example, the newly renovated Trump International Hotel in Washington, D.C., formerly known as the “Old Post Office.” The District of Columbia valued the property at $91 million. Trump took the district to court, claiming the property was only worth $28 million, according to documents obtained by Politico.

There is also the sticky situation on income tax for real estate developers.

“I would expect that his taxable income is zero,” said Stuart Zimmerman, a former investment manager and executive in residence at St. Louis’ Washington University.

Because of the way the tax code is written, developers are allowed to deduct millions of dollars for depreciation, even if their property is appreciating in value.

“And if it ever gets to the point where it looks like there is going to be some taxable income and they’re going to have to pay some tax because they’re running out of depreciation, just start another project,” Zimmerman said. “It’ll show losses in those first years.”

To be fair, there is nothing in that arrangement that is illegal. However, given that the industry can act like a giant tax shelter, that could make it hard for voters to relate.

Matt Mackowiak, a Republican strategist based in Texas, said Trump’s calculation to hold on to the returns probably isn’t about politics as much as protecting the candidate’s carefully constructed image.

“The single most important thing to Donald Trump, he wants everyone, and particular his peers, to believe that he’s a billionaire,” Mackowiak said. “And so if the tax returns themselves showed him to not be as wealthy as he says he is, he could never accept that, ever.”