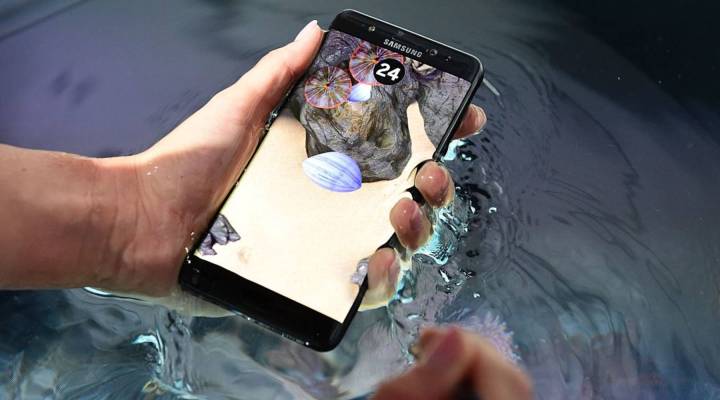 COPY
In addition to reports that the Galaxy Note 7's battery can catch fire and explode, the Federal Aviation Administration has warned passengers not to use Samsung's phones in flight or check them in baggage. TOBIAS SCHWARZ/AFP/Getty Images

In addition to reports that the Galaxy Note 7's battery can catch fire and explode, the Federal Aviation Administration has warned passengers not to use Samsung's phones in flight or check them in baggage. TOBIAS SCHWARZ/AFP/Getty Images
Listen Now

The U.S. Consumer Product Safety Commission on Friday urged owners of Samsung’s Galaxy Note 7 to shut the devices down and stop using them after reports that the phone’s lithium-ion batteries can catch fire and explode. The company had already announced a global recall of its newest smartphones due to safety concerns. Meanwhile, the Federal Aviation Administration has warned passengers not to use the phones in flight or check them in baggage.

Amidst all of this, along comes rival Apple with its iPhone 7 launch this week.

“You couldn’t have asked for a worse time, right?” said Will Stafega, a mobile device analyst at research firm IDC.

Samsung had been gaining some ground against Apple, Stafega said. The Galaxy Note 7, with its notetaking features and iris scanner, had been selling well since its Aug. 19 debut.

“The device was very well received, and they were looking to shore up their position against the upcoming Apple iPhone 7 release,” Stafega said.

More stress testing would have revealed the battery problems before the Note 7 launch, said Pradeep Chintagunta, a professor of marketing at the University of Chicago Booth School of Business.

“Sometimes when you’re in a hurry to launch these new products, you end up in a situation where you haven’t perhaps tested the product as much as you should have,” he said.

But don’t expect device makers to heed this warning, said Neil Mawston, executive director of Strategy Analytics in London. The competition for more, better, faster is too fierce.

“There are about a thousand brands competing in the smartphone environment worldwide,” he said. “So I think it’s likely that the pace of delivery for new models is likely to get quicker, not slower.”

If Samsung fixes its battery problem and makes customers whole, analysts said the company is likely to move past this fairly quickly.

Meanwhile, it’s been dealing with another headache: trying to recover nearly $38 million worth of TVs and appliances stranded at sea after the bankruptcy of South Korea’s Hanjin Shipping.