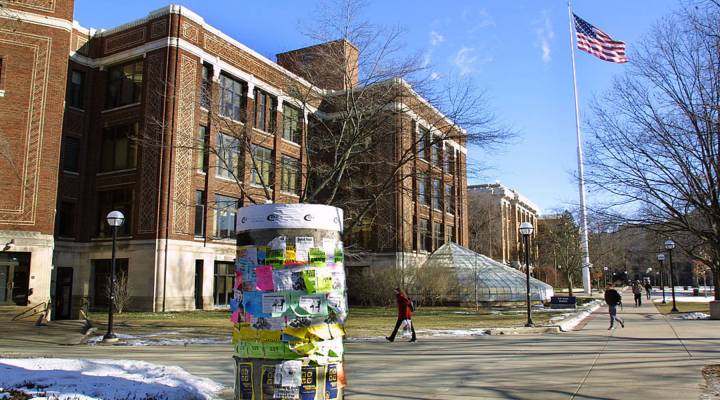 College admissions season can be a stressful time, but a new survey suggests it doesn't have to be. Above, the University of Michigan in Ann Arbor. Bill Pugliano/Getty Images

College admissions season can be a stressful time, but a new survey suggests it doesn't have to be. Above, the University of Michigan in Ann Arbor. Bill Pugliano/Getty Images

College admissions season can be a time of high anxiety for high school students and parents a like. Doing tours, taking tests, writing essays and waiting on letters, or worse, getting off a wait list can all be stressful. But a new survey says unless you’re applying to a super-elite school, you could be stressing out for nothing.

The National Association for College Admission Counseling found the average admissions rate was just over 65 percent in 2014. That’s up from the year before, Inside Higher Ed reported. Less than a fifth of schools admitted fewer than 50 percent of applicants.

That’s important as many applicants and their parents may have spent the summer reading about Stanford’s record-low acceptance rate of 4.69 percent or similarly brutal rates at other elite schools. Those scary numbers could be creating some admissions panic. Back in 2013, nearly a third of students said they submitted seven or more applications, and applications from new freshmen were up 6 percent between 2014 and 2015, the NACAC survey found. All the fees, prep, tests, deposits and tours can add up to thousands before parents have even sent their first tuition check.

Does all that money pay off? As one high schooler noted in an L.A. Times column this week, college visit speakers love to talk about a “holistic admissions” process, but the NACAC survey paints a slightly different picture. Nearly 80 percent of schools said grades in college prep courses were of “considerable importance” to be admitted. About 60 percent of schools said other grades and taking rigorous courses were as important. Compare that to just 22 percent who said essays were considerably important.

Point being: If you apply to college, you’re likely to get in, and maybe don’t sweat that essay.