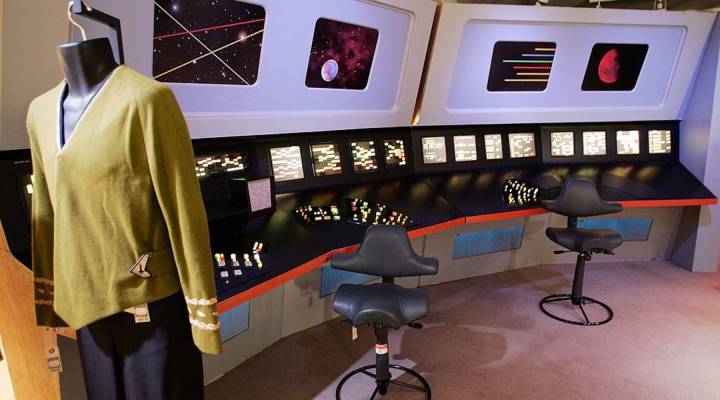 If you were stranded in a remote sector of the Delta Quadrant this week, you might have missed the fact that tomorrow marks the 50th birthday of “Star Trek.”

The original NBC series made it so on September 8, 1966, and this year Trekkies everywhere have no shortage of ways to celebrate.

Marketplace Tech is also celebrating this week, so we decided to join in with the most Marketplace way we can think of: by interviewing economist Paul Krugman.

Krugman is a Nobel laureate, columnist at the New York Times, and a really big sci-fi fan. Of course, that includes “Star Trek.” Krugman spoke with Marketplace’s Molly Wood.

On what immediately jumps out at him when he thinks about the economies represented in “Star Trek”:

Actually, we had this great panel at New York Comic Con last year based around a book by Manu Saadia, who’s written a book called “Trekonomics,” which he “wrote the book” on this subject. And the point he centers around is that, not in the original series but thereafter, in the “Star Trek” universe, it’s a world of total abundance. It’s a world where replicators will make anything you want, so it’s a world that has no money. It’s not a world where anybody asks, “Can I afford this?” It’s not a world in which people work for the sake of getting rich…. And that’s interesting, it’s very different.

What dark side could be lurking in a post-scarcity economy like the one imagined in “Star Trek”?

Well, first of all, it turns out there’s lots of room for things to go wrong. There’s lots of room for evil. Do we have examples of post-scarcity economies in miniature out there? And we do in various versions. Some of us live — actually college professors — live in an environment where there isn’t that much disparity in salaries but there’s lots of disparity in prestige and how you’re regarded…. People still compete over certain jobs. Is that really the end of the problem? And in the “Star Trek” universe, there’s violence, there’s war, there’s an amazing number of holodeck malfunctions. But anyway, leaving that aside … making money is not the root of all evil is one of the lessons of “Star Trek,” kind of an unintended one.

On what “Star Trek” gets right when it comes to imagining our economic future:

I believe that the notion that it’s not going to be the same. I have to say, one failing of a lot of speculative fiction, science fiction, whatever, about the future is that often, it tends to imagine that it’s very old fashioned, that it’s still brawny workers and cruel bosses. If you like a contrast, I actually like “Star Wars” too, but the “Star Wars” universe seems to be one where they have all this technology and all these robots, and yet the structure of the human economy, with slaves and all of that, seems to be almost medieval. That’s not very likely, that’s not how it’s going to be. So “Star Trek” by saying, “Look, it can be different” — that’s right.

There are more TV shows looking at the 99 percent of people — the dispossessed — which stands in contrast to “Star Trek.” Do you think the latter is an undated mode of storytelling?

No, I think it’s just that we’re looking in some ways at the change in the political environment. You know, “Star Trek,” certainly the original series, was at the height of optimism about the welfare state, it was the War on Poverty. You wouldn’t have envisioned a future, it was the 1960s, of no jobs for workers and an enormously wealthy elite, that was stuff that was the past, that was the Gilded Age, that wasn’t going to happen again. Now we’re living in the second Gilded Age, which in many ways is more gilded than the first, and so it makes sense that our vision of the future, your vision of the future, always reflects the present, and right now oligarchy seems like a fairly natural state for humanity.