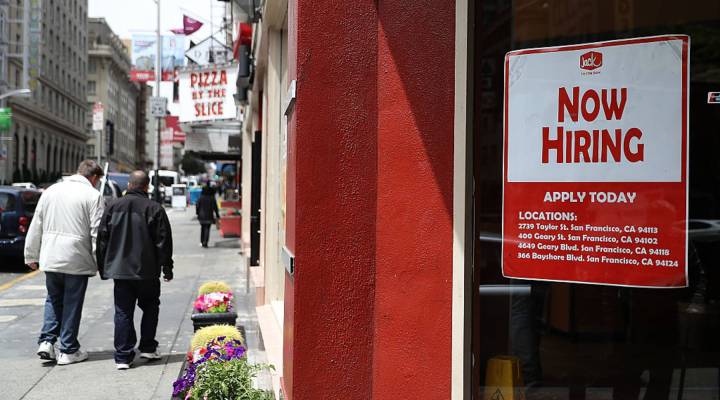 The quits rate — a measure of how many people are leaving jobs voluntarily, which is considered a sign of people’s optimism about their job prospects — held steady in July at 2.1 percent, 0.2 percent higher than one year ago, and at approximately the same level as before the Great Recession. The quits rate fell to a low of 1.3 percent in the aftermath of the Great Recession in 2009-2010. It reached a high of 2.6 percent in 2001.

And in some sectors, employers are looking for a lot of new workers, said Andrew Chamberlain, chief economist at the online job-search site Glassdoor.

“You see many open positions in health care, professional and business services, and some leisure and hospitality,” Chamberlain said.

Based on data analysis from Glassdoor, salaries in some of the employment fields with the greatest demand from employers are rising by 6 percent to 12 percent per year. Examples include: sales manager (12.8 percent), certified nursing assistant (11.0 percent), financial adviser (7.8 percent), emergency medical technician (6.8 percent) and front-end developer (6 percent).

On the other hand, some jobs have seen declining salaries in the past year, including forklift driver (-0.6 percent), delivery driver (-1.4 percent) and property manager (-2.9 percent). Chamberlain said these jobs are under pressure from slack employer demand for workers (for instance, in manufacturing), as well as from automation and structural changes in the economy.

Meanwhile, average hourly wages (as reported in the monthly jobs report from the Labor Department) are rising at 2.4 percent annually. And the rate has not accelerated in the past year.

Economist Dean Baker, co-founder of the Center for Economic and Policy Research, said that in spite of the record number of job openings employers report they are seeking to fill, and an unemployment rate below 5.0 percent, employers don’t feel compelled to offer higher pay or more on-the-job training to actually fill open positions.

“So many people have left the labor market — prime-age workers, 25 to 54 year olds,” Baker said. “We could tell the same story if we look at the large number of involuntary part-time workers, still near pre-recession levels. All that suggests that there are a lot of people who in principle want to work.” He said that this shadow labor supply gives employers more market leverage, relative to workers and job-seekers, over hiring and wages.

Another possible explanation for the lack of wage pressure is that employers aren’t actually trying that hard to recruit. Economist Jesse Rothstein at University of California, Berkeley, explained this hypothesis:

“It used to be that if you said you had a job opening, that was a position you were actively recruiting for, and you were offering a competitive wage,” Rothstein said. He speculated that “increasingly, employers are announcing job openings at a maybe-less-than-competitive wage, leaving it open for months to see if somebody great comes along.”

Another possibile explanation for the lack of broad-based wage gains at this stage in the job-market recovery is that employers are selectively offering non-cash rewards to lure candidates. Lori Farley-Toth, a vice president at global recruiting firm Adecco, said she’s seeing a lot of employers approach hiring “not just from a compensatory place, meaning just the salary, but, what are the benefits?”

Farley-Toth said that for millennial workers in particular, providing more job flexibility and opportunities for engagement, education and volunteer work might be more important than adding a few percentage points to the salary offer.