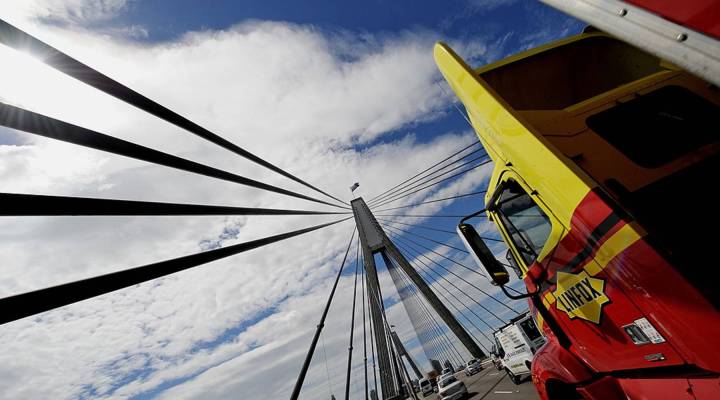 One rule of thumb: “$1.3 billion in, gets you $2 billion in growth,” said economist Heidi Crebo-Rediker, CEO of the consultancy International Capital Strategies and senior fellow at the Council on Foreign Relations. “The compelling case is that the dollar in on a macro basis results in more than a dollar out.”

A report from Standard & Poor’s estimates a $1.3 billion investment would deliver 29,000 construction jobs and cut the nation’s deficit by $200 million.

Still, the details matter, as some bridges lead somewhere and others go nowhere. Benefits vary widely. A national-level list of projects with the highest return on investment would be handy, but it doesn’t exist, in part because the country’s money tends not to flow from Washington, D.C.

“About three-quarters of our infrastructure is funded through the municipal bond markets, through our state and local governments,” Crebo-Rediker said. “And that’s the way that we are structured.”

Though it’s hard to make national comparisons, the good news for empiricists is that more infrastructure decisions are merit-based, incorporating cost-benefit analyses. It turns out big, cement-pouring projects to deliver new long-distance highway or rail networks tend not to deliver the highest benefit. Robert Puentes, CEO of the Eno Center for Transportation think tank, said the country’s nation-building phase is in the past.

“We were connecting the country within, we were getting farmers unstuck from the mud,” Puentes said. “That was a long time ago. A lot of those big trends have played out. The big challenge that we have is because all that the stuff was built in the ’50s, ’60s and ’70s, it’s got to be rehabilitated, it’s got to be maintained.”

The maintenance list grows longer by the day. According to the American Society of Civil Engineers, the nation’s power grid suffers more than 300 big outages a year. One in nine bridges is deficient. Every year brings 240,000 water main breaks. Shipping barges on inland waterways have an average 52 service interruptions a day.

According to Puentes, a dollar spent on upkeep, on preventing billion-dollar catastrophes, makes for a great investment.

“It’s easier to allocate money for new, shiny projects than for fixing things,” Puentes said. “But we do know from that it’s always cheaper and it’s always better in the long run to maintain the existing system than wait until it has to have wholesale rehabilitation.”

In his view, the way to prioritize projects is to ask: What are you trying to achieve? If you want to transport more people to more jobs, you might buy more buses. If you want to build a workforce for the next generation, you might build new schools.

“Are we trying to boost international competitiveness? Well, that’s going to lead you to projects around probably freight movement, or ports,” he said. “If we’re trying to reduce greenhouse gas emissions, then you would probably look at projects that are going to get people to choose something other than the single-occupant vehicle. Biking, or walking, or taking mass transit.”

The challenge is when the ideal world of investments crashes into the one we have today. Infrastructure money is political. A lot of spending inertia remains in the system.

“There’s a tendency to keep spending the way you spend,” said transportation consultant Alan Pisarski, “and giving 13 percent to this region, this region gets 9 percent, instead of saying, ‘what does the region as a region need?'”

And, Pisarski said, statistics in a political setting are open to opportunistic fudging. One old trick is what’s known as “optimism bias” — proposing to build something and over estimating how many people will use it.

“There’s a tendency to be positive about ‘Yes, this is really going to work.’ Especially when you’re using other people’s money, strangely enough, that bias comes in.”

In addition to the politics of money and infrastructure, an added challenge is predicting where and how we’ll live in the decades to come. Will there be a return to downtowns? How many Americans will continue to own and drive personal vehicles? What will happen to the outer suburbs?

“This is the most volatile and difficult period for forecasting travel activity,” Pisarski said. “Autonomous vehicles, Uber, auto ownership, walking, biking. The drama, if you will, is substantial.”