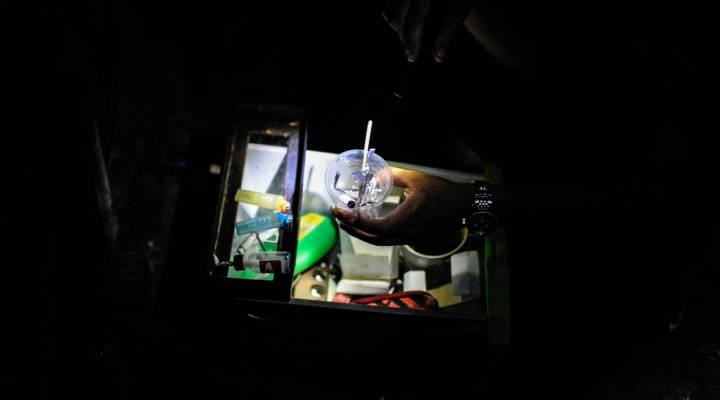 Duterte was annoyed that President Barack Obama would raise issue with the number of extrajudicial killings in the Philippines under his watch— something Duterte is seen as promoting in order to quell drug trafficking and dealing. Two thousand possible drug dealers have died since Duterte took office. For some, these contract killings have become a job.

“When I got near this person, who owed a lot to my boss, I went up close, and then shot him. The next time I killed was after President Duterte got elected. Since then I have killed five people. That’s six in all,” a young Manila mother told the BBC’s Jonathan Head.

“Maria” (a pseudonym Head uses to protect her from reprisals for speaking) said she was brought onto a team with three women after her husband was enlisted by a policeman she says was corrupt.

Head joined us to talk about his time speaking with Maria.

On those who have been killed in the war on drugs:

I don’t know who she’s killed and she doesn’t talk about it. She doesn’t like to know either. I do know the profiles of a lot of people who have been killed. I’ll give you an example. We went to one neighborhood in Manila, following up some security camera video that we had of a man being shot early in August by …what the Philippines call a tandem. It’s two guys in a motorbike. The back one literally comes up – this guy’s at a food stall – she shoots him in the neck, off he goes. And when we went back to the neighborhood and talked to the wife, the family, all the local officials as well who were there, they said this guy wasn’t actually involved in drug dealing. He had been a drug user but he was involved in illegal gambling which is another very big business in the Philippines, and that he had a dispute, again, with a policeman about it and they believe that was the reason he’d been killed. So it’s very hard to know why people are being killed and how big they are.

On those who speculate Maria isn’t a credible source, and that she’s trying to discredit Duterte’s war on drugs:

I mean I’ve heard that from some of his allies and they’re asking us, “Why would she expose herself?” And the answer is she didn’t. We took enormous troubles to make sure that she wasn’t identified or identifiable, and it took a huge amount of persuasion to get her to talk. And she was actually really distressed talking about her job for the first time. And I asked her about talking to her children, and she was actually very, very distressed by this. And said that her 9-year-old — she’s got two kids — her 9-year-old boy had started noticing the money coming home, they hadn’t had money before, and asking questions. She lives with the enormous weight that, you know, what happens if the children find out later on and accuse her, saying ‘Well, you supported our lives by killing other people for money.’ Anybody who listens to this interview in full will know this woman was genuine.