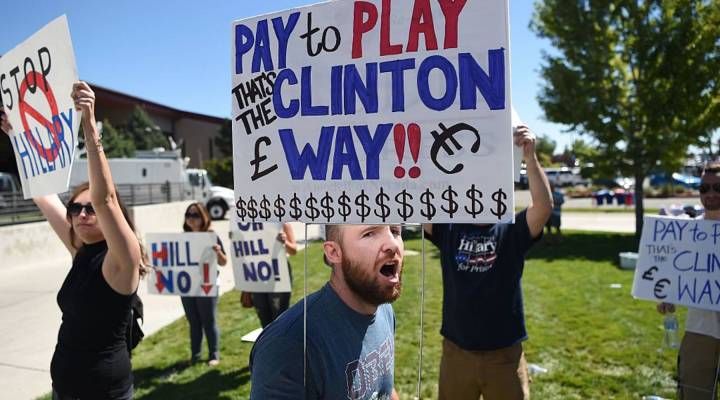 Goldman Sachs is laying down the law with some tough internal new rules about donating to political campaigns. The firm said partners can’t donate to state and local candidates running for office, or to state or local officials who happen to be running for federal office. That would include current Indiana governor and Donald Trump running mate Mike Pence.

The idea is to avoid even the appearance of what’s called “pay to play.”

The idea of pay to play is just what it sounds like.

“Someone has to make a campaign contribution or get money into politics in order to be in the game, get results,” explained Eric Heberlig, professor of political science at UNC Charlotte.

“There’s a long unfortunate history of exactly this sort of arrangement,” said Richard Skinner, a policy analyst with the Sunlight Foundation. “There’ve been scandals over the years— some years ago the comptroller of the state of New York was brought down by exactly this sort of scandal.”

The Securities and Exchange Commission passed rules about this in 2010 that specifically targeted financial advisers. It basically flipped the incentives in pay to play by saying: If you do donate to a candidate, you can’t get a government financial contract from that official for two years.

This is particularly an issue at the state level, because there are so many state pension funds that banks would love to manage. That’s why Goldman’s rules target giving to state and local office holders.

“So if you’re Goldman Sachs and you want to be considered for this business, you might want to decide that your employees are not making campaign contributions,” Skinner said.

This doesn’t mean, however, that financial companies can’t be involved in politics — they are. But it’s more at the national level where state pension business isn’t an issue. Goldman Sachs’ PAC gave $1.8 million to candidates for U.S. Congress so far in the 2016 election cycle.

And the SEC rules only apply to financial advisers — not to any number of other types of firms interested in government contracts, noted UNC’s Heberlig.

“So for a member of Congress deciding where to build bridges or allocate transport funding, it doesn’t affect that type of decision whatsoever,” he said. “It doesn’t affect donors in the defense industry or transportation industries trying to get public officials to buy their weapons or whatever.”