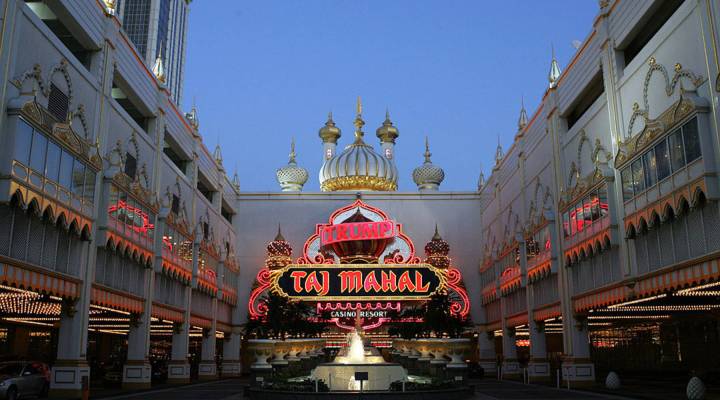 Donald Trump doesn’t own the Trump Taj Mahal casino in Atlantic City anymore.  His stake in the casino was wiped out when it declared bankruptcy and billionaire investor Carl Icahn took over. But the casino that still bears the Trump name is in trouble.

Just under 1,000 workers there are on strike.  They walked off the job on July first.  Now the casino says it’ll close next month.

James Mays has been a cook at the Trump Taj Mahal for 15 years.

“I’m an excellent cook,” he said. “I’m probably one of the best cooks in this whole building.”

Mays is standing with a group of striking service workers at the entrance to the casino.  They’re bellmen, cooks,  maids, and other workers represented by Unite-HERE.

The union wants health insurance and pension benefits restored. They were taken away when the casino declared bankruptcy. Workers had to pay for their own insurance. That was especially hard on Mays, because his wife had cancer.

“It was like, $704 every month,” he said.  “It came like every 15 days. You could never be late but like one time. You had to keep going if you wanted your family to stay alive.”

Mays wife died about a year ago.

The casino’s management says the casino is closing because the union is asking for too much.  The union says management has threatened to close before, and it’s just bluffing.  Mays said the workers will keep fighting for a standard benefits package. Like other casino workers in town have.

“People don’t have to give up what they had here,” he said. “People been here so long. You gave your blood, sweat and tears. Your heart is on this job.”

But it won’t be easy for all of the 3,000 workers at the Trump Taj  Mahal to find jobs if it does close.  There’s already a glut of laid-off workers, because four Atlantic City casinos closed in 2014.

The Atlantic City boardwalk, with the Trump Taj Mahal in the background.

“When you’ve closed four casinos already and a fifth one is closed, when your casino revenues are down more than 50 percent, there are obviously not nearly as many jobs on the casino floor,” said Steven Norton, a former casino manager who now works as a consultant.

Ellen Mutari is a professor of economics at Stockton University, near Atlantic City. She said some of the city’s laid-off workers did find jobs at other casinos on the East Coast. For others, it was just too hard to move.

“We have the highest foreclosure rate of any county in the United States,” she explained. “So it’s very difficult to actually just pick up and move for a job if you’re underwater on your home.”