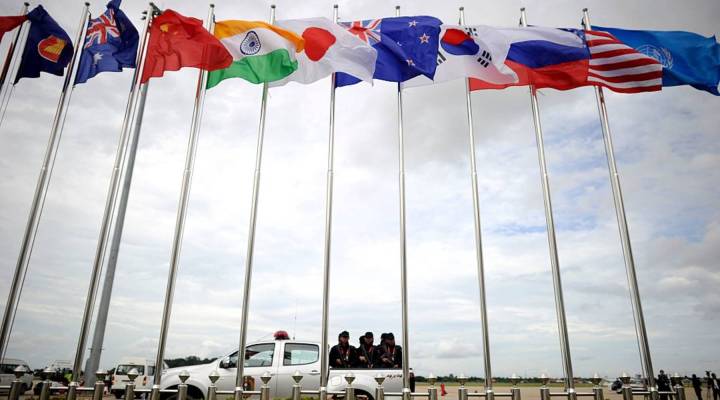 COPY
Obama is in town for the 28th Association of Southeast Asian Nations (ASEAN) hosted in Laos.  NOEL CELIS/AFP/Getty Images

President Barack Obama is in Laos this week, in the first-ever visit to Laos by a sitting U.S. president. He’s there for a regional summit hosted by the country: Laos is currently chairing ASEAN, the Association of Southeast Asian Nations, a group President Obama has been trying to strengthen ties with.

That puts the spotlight on the Lao economy, which has been in transition for quite some time — but that transition hasn’t been without controversy.

Laos has a small population, a hilly terrain with a lot of subsistence farming and fishing, and it’s sandwiched between China, Vietnam, Thailand and Cambodia. Its economy is pretty dependent on those neighbors, especially China — but some think connecting more strongly with other ASEAN countries and the United States is part of a shift away from that dependency.

“It’s trying to diversify, trying to depend more on Vietnam and other countries so that it does not have to rely excessively on China,” said Thitinan Pongsudhirak, who heads the Institute of Security and International Studies at Chulalongkorn University in Bangkok, Thailand.

Amy Searight, a senior adviser and director of the Southeast Asia Program at the Center for Strategic and International Studies, said the U.S. is encouraging that shift.

“Having an independent Laos is important for the United States,” she said.

The U.S. is concerned about the balance of power in the region and generally keeping China in check.

Much of Laos’ recent development is a result of international involvement: hydropower is the biggest industry, and there has also been international investment in mining and gas over the last few decades. Searight said Lao’s communist government has supported letting outside investors build dams.

“It sees this development of its electricity generation as really important to its economic future.”

But opening up Laos to development hasn’t always benefitted the Lao people.

“The benefits are not being evenly distributed, nor are the costs,” said Ian Baird, a geographer at the University of Wisconsin.

The dams on the Mekong and other rivers displace people, and cause problems for fish, a main food source for locals, but the power mostly gets sold to other countries.

Other types of development, like large-scale agriculture, have also displaced people. And while poverty has somewhat lessened over the last couple decades, inequality has grown.

Another important symbolic aspect of Obama’s visit to the country is the U.S. military’s history there: the U.S. secretly bombed Laos during the Vietnam war, killing and displacing tens of thousands of people. The war left behind around 80 million cluster bombs in Laos that continue to injure and kill people in explosions, and efforts to safely remove them have been slow.