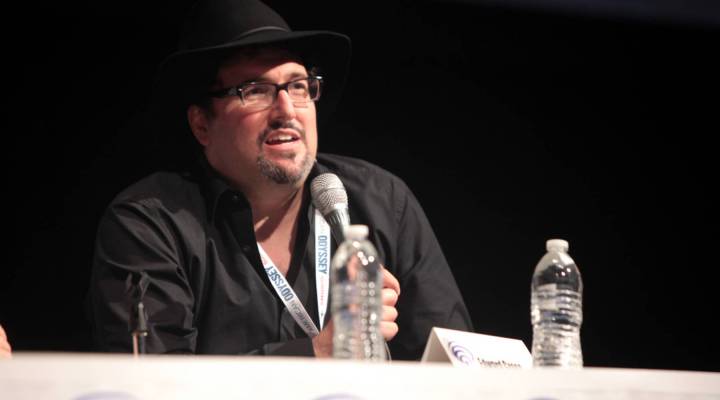 Writer Mark Altman knows the ins and outs of “Star Trek.” Dubbed by the Los Angeles Times as “the world’s foremost Trekspert,” he’s spoken with hundreds of people involved with the show, including writers, producers, actors and showrunners.

For the show’s 50th anniversary, he’s co-authored a two-part “Star Trek” oral history titled “The Fifty-Year Mission: The Complete, Uncensored, Unauthorized Oral History of Star Trek.” The second part of the oral history, “The Next 25 years: From The Next Generation to J. J. Abrams,” was released last Tuesday.

Altman joined us to talk about the reasons he tackled this project, and how the show mirrored serious issues going on in the world at the time.

On the format he chose to talk about “Star Trek”:

I am a huge fan of the oral history format. There was a book a couple of years ago; it was an oral history of MTV, which [was] called “I Want My MTV.” Which to me, was just a fantastic way to tell that story. It had depth. It had humor. It really captured  the voices of everyone involved. And it was like being at a really great dinner party with 500 different wacky people.

On the show’s use of science fiction to reflect global issues:

There are episodes like “A Taste of Armageddon” in the first season where there’s a war going on between two planets, but there’s no destruction. People are asked to walk into disintegration chambers and die if they’re deemed by a computer as a casualty. And the reason for that is it’s a way that they can protect their culture and their civilization without having the damage and destruction caused by a real war. This is an allegory, in a way, for what was going on in Vietnam where Walter Cronkite would come on TV and talk about the statistics of how many people died in Vietnam that day, and it was, in a way, to many, war by computer.

A lot of the technology originally seen in “Star Trek” anticipates, maybe not 300 years from now, but it anticipated 30 or 40 years from now, because we did see diagnostic sickbay medical technology [and] sliding doors — we didn’t even see in supermarkets at the time. “Star Trek” introduced the idea of this device from a planet, you can communicate with the ship; you flipped it open; it made a cool sound. And that was a huge influence on the Motorola flip phone and cell phones and mobile phones. So there’s really nothing that “Star Trek” depicted that is completely beyond the realm of possibility.