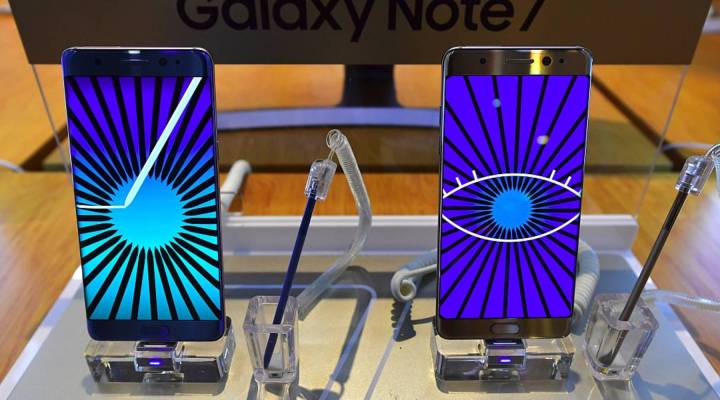 Samsung has announced it is recalling new Galaxy Note 7 smartphones because of “battery cell issues.” The recall reportedly affects 2.5 million of the phones worldwide shipped since the new version was launched in mid-August. Pictures posted online by consumers show the phones with what appears to be damage from overheating: the phones look melted or scorched.

Samsung is investigating the cause of the lithium-ion batteries overheating. Jeremy Kaplan, editor of Digital Trends, said the recall is embarrassing for Samsung—and comes at an inopportune moment, just before Apple launches its competing iPhone7.

But Kaplan said the issue doesn’t affect Samsung alone; there have been recurring problems with lithium-ion batteries, which power most of our consumer electronics.

“Lithium-ion battery technology has been around for decades, and frankly, manufacturers have never really solved the problems with these things,” said Kaplan. “Which is why we keep seeing battery-powered scooters that explode, e-cigarettes and cellphones and laptops that occasionally explode.”

The explosive potential comes from the lithium itself, an element that’s perfect for mobile devices because it stores a lot of energy in a small package. But, said analyst Claire Curry at Bloomberg New Energy Finance, “lithium is very reactive, quite dangerous and not stable on its own. So lithium-ion batteries combine the lithium with other metals to try to stabilize the lithium, while not reducing the energy density.”

And that strategy, combined with major advances in materials science, has worked well, said Scott Sklar, who teaches sustainable energy at the George Washington University.

“Lithium-ion batteries had a tendency to thermal runaway—to overheat,” said Sklar. “And there are lots of ways to prevent that problem. They’ve gotten much safer over time. Most of them have not exploded.”

Sklar believes that continued research to improve  lithium-ion batteries will keep them the standard in electronic devices for a long time to come. Although, he also said there is a lot of promising new battery technology in development: at university labs, in clean-energy startups, and at maverick companies like Tesla.

“We have a lithium-air battery, sodium batteries, nickel batteries, carbon supercapacity batteries,” said Sklar. “We have thin-film nano-batteries, mostly out of the defense sector, that I think will have huge applications for consumer electronics.”

Some of these technologies are only appropriate for use in large applications—such as energy utilities and vehicles—while others will likely be adapted to power small hand-held devices. And Sklar said most of these next-gen batteries are still many years from being put into mass production.