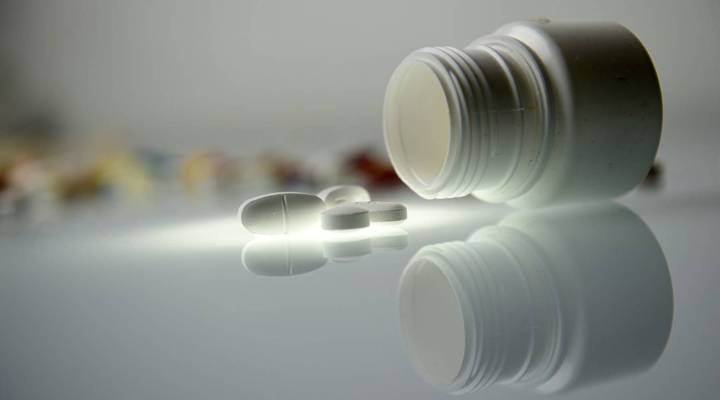 COPY
Rather than tackling the soaring prices of drugs overall, Clinton economic policy advisor Mike Shapiro said their plan is to address the insidious problem where a subset of drug makers crank up prices on generics, just because they can. FRANCK FIFE/AFP/Getty Images

Rather than tackling the soaring prices of drugs overall, Clinton economic policy advisor Mike Shapiro said their plan is to address the insidious problem where a subset of drug makers crank up prices on generics, just because they can. FRANCK FIFE/AFP/Getty Images
Listen Now

At first glance, it may sound like Hillary Clinton’s plan is an attempt to tackle drug prices overall.

Clinton economic policy advisor Mike Shapiro said it’s to go after an insidious problem where a subset of drug makers (think Turning and Mylan) crank up prices on generics, just because they can.

“What the plan is trying to do today is to figure out when there is an unjustified price increase and give the government a set of forceful new tools,” said Shapiro.

New tools like the ability to import drugs or levy fines against companies that raise prices astronomically.

While Harvard economist Amitabh Chandra applauds Clinton for putting together something he thinks this proposal does more to inspire Clinton’s base than tackle the root of the problem.

A number of people have advocated to let the U.S. government negotiate drug prices.

According to a recent Kaiser Family Foundation poll, 83 percent of the public favor giving Medicare that authority.

Here’s the argument for why it could work.

Right now, pharmaceutical companies benefit from the fact that their biggest drug buyer in the market – Medicare – is banned from negotiating prices.

Now if – and it’s a big if – the next President and Congress allow the government to negotiate with drug companies, it could set lower prices that would extend to the private market too.

Chandra said it’s a nice theory but as long as Medicare is required cover virtually every drug we won’t make much progress.

“We always say let’s get the government involved in negotiation, but what that misses again and again is that is only going to get us lower prices if the government can walk away from things,” he said.

One big problem is that Medicare must cover most approved drugs.

Chandra’s preferred approach is to give more power to companies that already negotiate with PhRMA – so-called pharmacy benefit managers like CVS Caremark and Express Scripts because they can – and do – walk away from the table.

“You are telling a manufacturer, ‘look dude, I’m quite willing to go with the Novartis drug because your drug is just too expensive,’” Chandra said.

Clinton’s announcement today highlights a fundamental dilemma we must when it comes to drug prices; if we want lower prices, we can’t have it all.

And until now, that’s perhaps been the toughest pill to swallow.