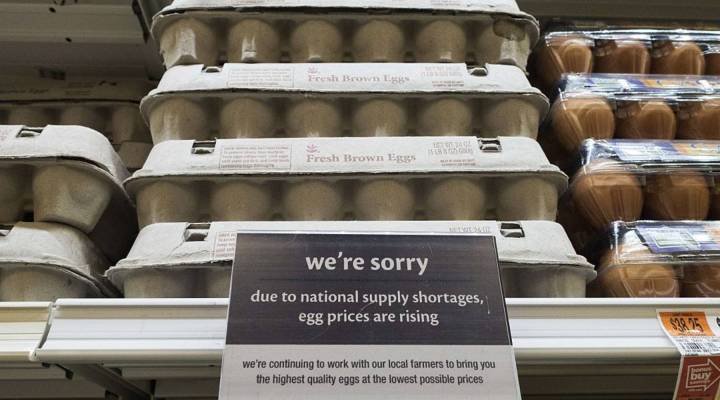 COPY
A notice that the price of eggs will be rising soon is seen at a Giant grocery store in Clifton, Virginia. In 2015, widespread outbreaks of Avian Flu costed poultry producers almost 40 million birds, causing the price of eggs to rise sharply.       PAUL J. RICHARDS/AFP/Getty Images

A notice that the price of eggs will be rising soon is seen at a Giant grocery store in Clifton, Virginia. In 2015, widespread outbreaks of Avian Flu costed poultry producers almost 40 million birds, causing the price of eggs to rise sharply.       PAUL J. RICHARDS/AFP/Getty Images
Listen Now

Poultry producers were hit hard by the avian flu last year. It cost them about 40 million birds. At the time, egg prices shot up. That pushed demand down.

Urner Barry egg market analyst Brian Moscogiuri said flocks then rebounded faster than expected. But demand didn’t. Exports are still down. And big food companies, which tweaked their recipes in the wake of bird flu, continue to get by with fewer eggs in their products. Moscogiuri said egg producers and processors are struggling.

“The carton market hasn’t been over a dollar since this past Easter,” he said. “Their dried egg inventories are at five-year highs.”

To address the low demand, the U.S. Department of Agriculture is stepping in to buy about $12 million worth of eggs and egg products.

It gets authority to do so under an agricultural support program that dates back to the Great Depression. Section 32 of the Agriculture Act of 1935 aimed to help impoverished farmers survive and keep their commodities from going to waste amid low demand.

“Sometimes it’s used to purchase fruits and vegetables or other commodities, like eggs, for example, for which there’s no substantial other federal government,” said Daniel Sumner, an agriculture economist at the University of California-Davis.

Taxpayers don’t foot the bill; the purchases are funded by import tariffs on agricultural commodities.

Some of the other stuff the USDA has recently said it would buy up? Cheese, orange juice, blueberry products and raisins.

Sumner said when the program was devised, in the Depression, farmers were extremely poor. But he said that’s not the case today. He questions the public policy benefits.

And he doubts the government’s purchases will make a big difference for egg and dairy producers who might be on the brink.

“For the cheese and egg purchases, the total money being spent by USDA was tiny and could not have any substantial lasting impact on the market prices or the net incomes of dairy or egg farms,” he said.

“They tend to not buy a lot of this stuff,” he said. “We were kind of hoping they would’ve bought a little more.”

But he said the moves could give farmers a psychological boost. And he said the food will get donated to people who might not have had access to it otherwise.

Agriculture economist Vince Smith at Montana State University said the value of those donations depends on the food products purchased and the recipients. He said eggs and cheese are more useful than, say, canned peaches.

“If the protein ends up improving the diets of children,” he said, “that’s difficult to say that’s a bad use of funds.”