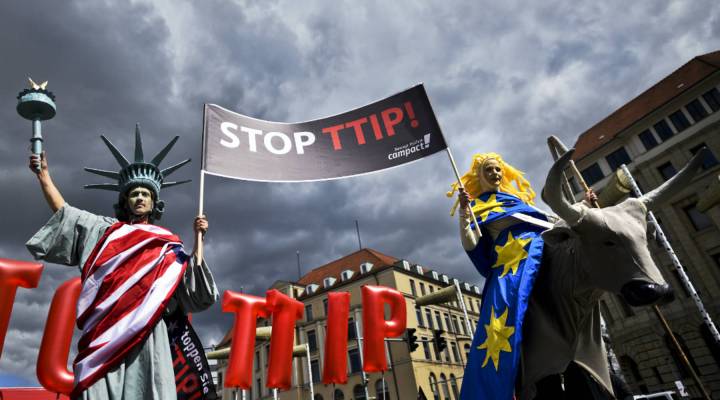 COPY
Protesters rally against the TTIP in Hanover, Germany back in April. Sascha Schuermann/Getty Images

Protesters rally against the TTIP in Hanover, Germany back in April. Sascha Schuermann/Getty Images
Listen Now

The Transatlantic Trade and Investment Partnership is in trouble. TTIP – as it’s known – is the highly controversial plan to create a free trade zone between the U.S. and the European Union. Supporters say it could pump tens of billions of dollars into the U.S. and European economies.

But after three years of hard bargaining, TTIP has just suffered a couple of  major setbacks. French President Francois Hollande announced that the deal could not be completed on schedule and Germany’s deputy leader, Sigmar Gabriel, went further, declaring that TTIP has “de facto failed.”

The talks had provoked angry protests across Europe from labor unionists, environmentalists and pro-democracy campaigners.  The fundamental fear fueling opposition to the deal is that it could mean domination by American corporations, and lower European safeguards for consumers, workers, and the environment.

“The U.S. is seen as this unregulated, red in tooth and claw kind of place, and if we have to standardize regulation with the U.S., that will lead to an erosion of standards and protections within the EU,” said Simon Tilford of the Centre for European Reform.

TTIP is widely seen in Europe as an elite project, a playground  for corporate lobbyists, according to Nick Dearden of the campaign group Global Justice Now.

“It’s become a symbol of how people feel they have been abandoned and marginalized and let down by the global economy,” Dearden said.

TTIP supporters — like Michael Wohlgemuth of the Open Europe think tank in Berlin – argue that the opposite is true: The world’s biggest-ever free trade deal represents the best hope for the marginalized.

“It’s a fundamental truth of economics that overall free trade is quite beneficial and protectionism is what hurts the poor most,” he said.

If so, the poor could be facing a grimmer future. TTIP isn’t dead yet, but even firm supporters like Wohlgemuth say it does now appear to be doomed.