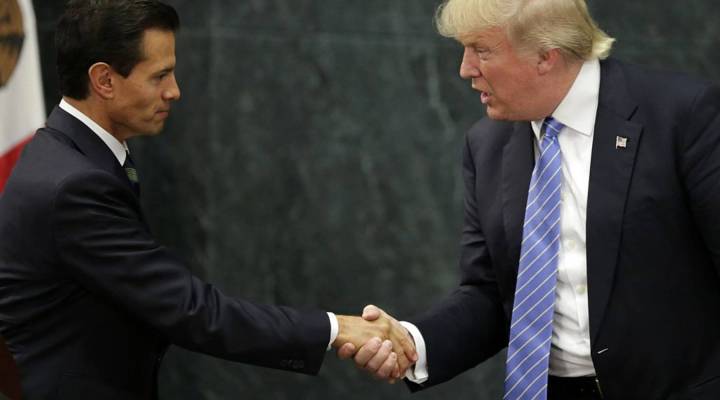 The meeting, which Peña Nieto called “very open and constructive,” spurred backlash from some critics. Mexicans seem to be feeling animosity toward Trump, given some of his comments about the country have focused on Mexican immigrants and his intention to build a physical wall along the U.S. and Mexican border. Trump said previously that the U.S. should withhold migrant remittances until the Mexican government agreed to pay for the wall.

While the pair did discuss the proposed wall, they did not talk about who would pay for it, Trump said in a press conference following the meeting.

“We did discuss the wall, we didn’t discuss payment of the wall. That will be for a later date,” he said. Peña Nieto later disputed this statement in a tweet, saying he made it clear Mexico would not pay for a wall.

Trump also outlined the other goals discussed in the meeting, including ending illegal immigration, which he called “a humanitarian disaster,” and disbanding drug cartels.

He focused on how to “keep industry in our hemisphere” as well, saying that “we have tremendous competition in China and in other parts of the world.” Both the president and Trump framed the relationship of the two countries as one of mutual benefit. Mexico has certainly been one the U.S. biggest partners in trade.

Here’s a brief look at where our relationship with Mexico stands, by the numbers:

$40 billion: Our biggest exports to Mexico are machinery and electronics at about $40 billion apiece last year. Our biggest imports were vehicles at $74 billion.

$49.2 billion: Mexico’s total trade deficit with U.S. goods and services was $49.2 billion last year. Trump has said that money could go toward paying for his wall. The candidate hasn’t put a price tag on that project but reported estimates go up to $25 billion, plus additional maintenance and staffing costs. Experts told Politifact the trade deficit has nothing to do with Mexico’s ability to pay.

$24 billion: Another plan Trump floated this spring was cutting off remittances to Mexico. The country took in $24 billion in wired payments from services like Western Union in 2014, but officials on both sides of the border have dismissed that idea

40 cents: Mexico’s middle-class has been fueled by manufacturing jobs that moved south from the U.S. It’s a hobby-horse for Trump, who blames NAFTA for “killing” those jobs. Clinton hasn’t been keen on it either. But Mexico’s manufacturing boom is actually helping America, which is in a mini-manufacturing boom of its own, despite an overall drop in jobs. In order to keep making stuff, Mexico needs to consume more U.S. goods too — about 40 cents of every dollar that the United States imports from Mexico comes from the U.S.

10 percent: As much as 10 percent of Texas’ workforce is made up of illegal immigrants, according to one estimate. During primary season, economist Ray Perryman told us that mass deportation along the lines Trump has discussed would destabilize the state’s economy.