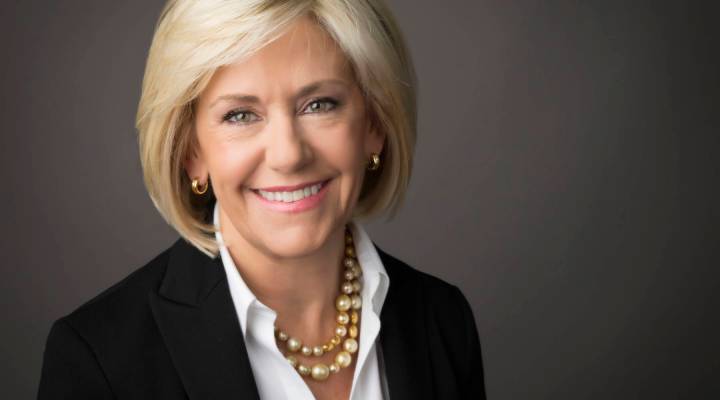 You know those lists that come out every year ranking the highest paid CEOs? Well, one from the Dallas area caught our eye — there was only one woman in the 100 top paid public company CEOs.

Pam Patsley is used to being both a powerful and a petite woman. When we meet in a 15th floor conference room in Dallas, the first thing she does is adjust the height of her chair so her black ballet flats reach the ground. It’s something she has to do quite often.

There’s nothing small about Patsley’s salary, though. Last year she made almost $11 million as CEO of MoneyGram International, one of the world’s largest cash-transfer firms.

In 2009, right after the financial crisis, the company was in trouble, and Patsley was hired to steer the behemoth to safety — all $1.2 billion of revenue and 200,000 agent-locations – and she did, successfully.

She comes from a family of teachers, but always had her eye on making money.

“[I] was more driven less about position but just really about achieving and earning money, to be perfectly candid,” she said.

She assumed it wasn’t unusual for that to be a woman’s goal. So, when she saw her name on the 2016 list of top-paid public company CEOs in North Texas, she was taken aback.

“I was surprised there was only one woman on the list,” Patsley said.

That low percentage is what Elissa Sangster wants to change. She’s executive director of the Forté Foundation, a group that seeks to put more women in top-tier business careers.

“I think everybody thinks this problem is solved and you see evidence in the media that there are a lot of women leaders out there,” Sangster said. “But it’s not reflected in the business world in those top CEO spots.”

Sangster says by not having more women in the C-suite, companies could be losing money.

“There are many research studies and cases that have been made for why having more women in leadership makes a difference in your corporation’s overall return on investment, your return on equity,” Sangster said.

She’s product manager with the Boston-based trading platform Quantopian. She ran a simulation investing only in publicly-traded, women-led companies from 2002 to 2014.

“And it outperformed the S&P 500 pretty dramatically,” Rubin said. “With 200 percent greater gains than the S&P 500 over the same time period.” Rubin was shocked.

“I’ve spent a year and a half now trying to disprove it, to understand if there’s a fallacy in my thinking or the code I wrote,” she said. “I have not been able to find something that completely disproves it yet.”

Still, you can’t stick a woman in the CEO spot and expect profits to magically rise. In fact, a study by the Peterson Institute for International Economics shows one female figurehead isn’t enough.

In the research, profitability only went up when multiple women were in corporate leadership — but that was for companies that went from having zero women leaders to a 30 percent share.

Elissa Sangster is coaching Fortune 500 companies to groom young women for these top jobs, by reaching them at the very start of their careers.

“Instead of having this mysterious career path, they’re showing them the step-by-step ways to make it to the top,” Sangster said.

MoneyGram’s Pam Patsley is all about giving others the mentorship she didn’t have. She tells young women — find something you’re passionate about, work hard, and don’t be afraid to adjust a few chairs.

Click the audio player above to hear the interivew.