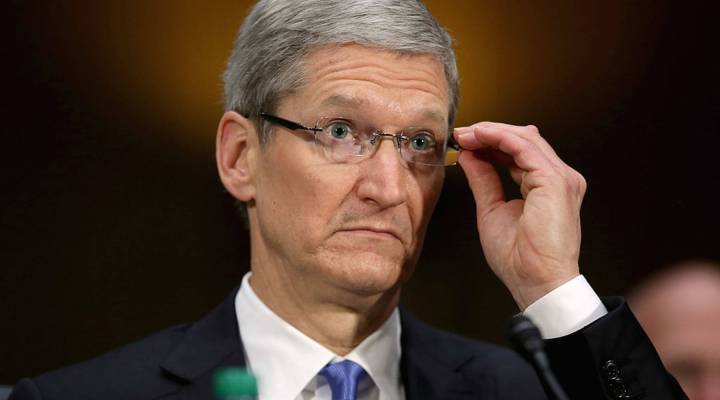 COPY
In 2013, Apple CEO Timothy Cook testified before the Senate Homeland Security and Governmental Affairs Committee about the company's offshore profit shifting and tax avoidance. Recently, The European Commission served Apple with a bill for back taxes over $14 billion owed to Ireland— a price that may be a direct financial cost to the U.S.  Chip Somodevilla/Getty Images

In 2013, Apple CEO Timothy Cook testified before the Senate Homeland Security and Governmental Affairs Committee about the company's offshore profit shifting and tax avoidance. Recently, The European Commission served Apple with a bill for back taxes over $14 billion owed to Ireland— a price that may be a direct financial cost to the U.S.  Chip Somodevilla/Getty Images
Listen Now

If Apple actually ends up having to pay Ireland $14.5 billion in back taxes, the company could still break even on the deal.

“The U.S. is going to pick up the tab for this,” said Robert Goulder, senior tax policy counsel with Tax Analysts. “In the case of Apple, if they have to write a check for 14 and a half billion dollars to the Irish revenue agency, strangely Apple might not care…because then they get to claim a dollar for dollar credit in the same amount… to offset their U.S. corporate taxes”

The U.S. Treasury Department is joining the Irish government in opposition to the ruling against Apple. In a letter to the European Commission earlier this year, and in a more recent white paper, Treasury complained the Commission is unfairly targeting American companies and charging U.S. firms higher penalties.

“There’s a direct financial cost to the U.S., as well as a concern about whether the Apple case is just the first of a number of cases to get U.S. companies with big dollar numbers,” said Peter Barnes, who teaches law at Duke University and practices with the law firm Caplin & Drysdale.

It’s basic corporate accounting 101 try to pay as little tax as possible, but companies shopping around the world for the lowest tax rates is popular fodder for campaign speeches this election season. Both Hillary Clinton and Donald Trump complain that big corporations exploit the system.

Donald Tobin, dean of the Francis King Carey School of Law at the University of Maryland, said the idea of corporations not paying their share of taxes pricks people’s sense of fairness, which he said “plays very well for both the right and the left, and that’s why you’re going to continue to see it discussed in presidential campaigns.”