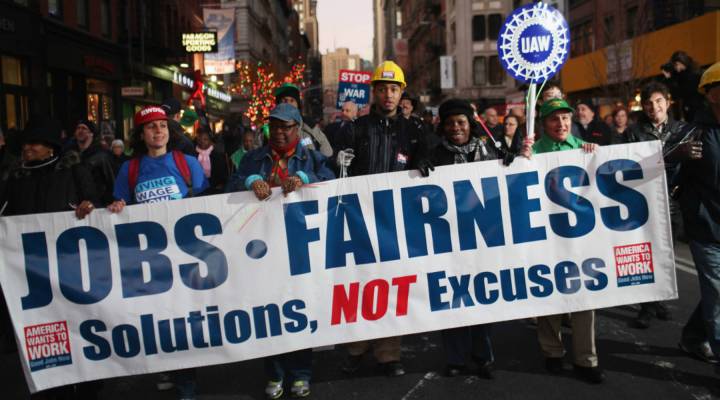 There’s this notion out there that unions are great for union members, and that’s pretty much it. But a new report from the Economic Policy Institute  looks at how the decline in labor unions has affected nonunion workers.

Since the late 1970s, unionization has declined, particularly among men in the private sector who don’t have a college degree. Jake Rosenfeld, who teaches sociology at Washington University, co-authored this study and said strong unions mean higher wages for both union members and nonmembers.

Rosenfeld looked at nonunion wage growth since 1979. He said union decline has had a staggering effect on nonunion workers.

“We’re talking about over $100 billion a year in lost wages,” he said.

Adjusted for inflation, he found  the median pay for those men without a college degree is about 13 percent lower than in 1979.

One reason? What Arin Dube called the “threat effect.” Dube, a visiting professor of economics at Boston University, said when there are a lot of unions, “even nonunion employers may raise wages to prevent unionization.”

At the same time, Dube said, unions can drive wages down when higher pay leads companies to cut jobs.