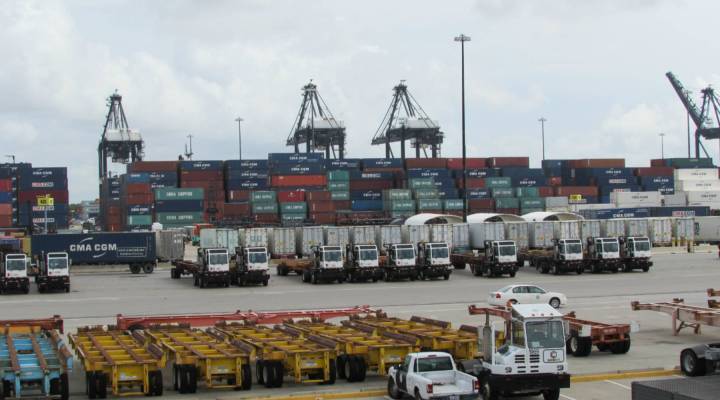 The widened Panama Canal is likely to have a significant impact on global shipping. Here in the U.S., gigantic ships that could only fit on West Coast docks can now get through the canal to the Gulf of Mexico. That means a sizable increase in traffic for the Port of Houston — which has already begun a billion-dollar plan to upgrade its infrastructure.

It’s a hot, humid morning at the Port of Houston and a line of towering dockside cranes rises through the heat and haze behind a wall of colorful containers. Ryan Mariacher, the Port of Houston’s Director of Container Terminals, is giving a tour of the Bayport Terminal, the port’s newest facility.

The port has bought nine new cranes for the terminal that are almost 28 stories tall. It’s also dredged the port’s channels to accommodate the bigger vessels. These new ships need a depth of about 45 feet of water, about five feet more than before.

New cranes at the Port of Houston’s Bayport Terminal.

According to economic projections, the port could see about a 15 percent boost in activity by 2020.

“Here presently in 2016, we’re about halfway through our master-planned development build-out,” Mariacher said. “And we’ll continue to build out over time as volume increases.”

The Port of Houston primarily handles cargo that travels by truck on the region’s extensive highway network. Chief Commercial Officer Ricky Kunz said they see a pretty even mix of imports and exports. And that’s one of their selling points as they try to lure new business. Kunz said containers arrive in Houston full — and they leave full.

“Ocean carriers obviously like that because if you’re carrying an empty box, you’re not making any money,” Kunz said.

Coming into Houston are ships carrying consumer goods, like clothes and electronics. When they head out, many are loaded with plastic resins generated by the petrochemical industry.

“This is new cargo that is being generated for export,” Kunz added. “And it’s only for export.”

This should translate into hundreds of new jobs in logistics and distribution. Maria Burns is with the Center for Logistics and Transportation Policy at the University of Houston. She said schools need to train young people for this new era.

“Anything from business, being an entrepreneur, being a leader could also help you learn things about the supply chain, and also trade, transportation mode and technologies. They also blend together so well,” Burns explained.