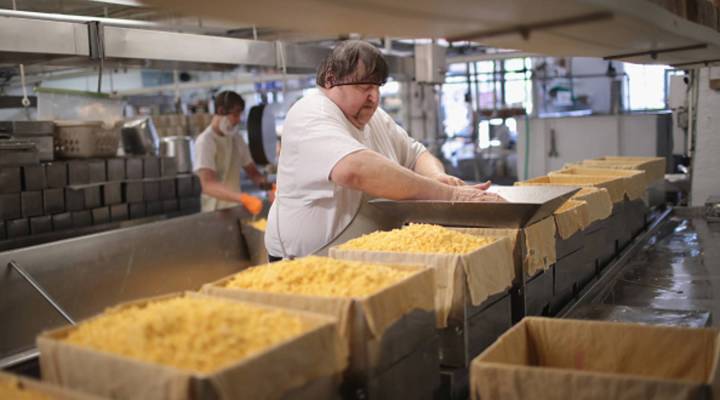 You might think it’s your American duty to buy a few extra blocks of cheddar this weekend, given the U.S. government’s need to purchase surplus cheese in order to help the dairy industry. But rest assured. You have already played your part.

Americans are eating more cheese than ever — consuming over 34 pounds per capita in 2015 — and there’s no end in sight for our love with this dairy staple.

“Cheese consumption has been continuously going up for the last 20 years, and it doesn’t seem to be stopping,” said Leslie Butler, an agricultural and resource economics lecturer at the University of California, Davis.

It’s not totally clear what is driving the consumer cheese market, but Butler suspects it has something to do with the rise of a particular food sector: pizza.

“Pizza has been a big pusher of cheese,” he said, especially given the food’s artisan revival in recent years. There are about 70,000 pizzerias in the U.S., contributing to a $45 billion industry that is continuing to grow quickly, CNBC reported today.

American’s love for pizza aside, the U.S. cheese surplus issue is not a result of consumer habits.

The dairy industry has more than a billion pounds of cheese, worth $150 million, sitting around in freezers because of the global market for cheese is saturated. The Department of Agriculture said Tuesday that it would buy up $20 million worth of that surplus cheese to give to food banks.

Increased milk production elsewhere and a strong U.S. dollar is making it harder for American dairymen to sell cheese, according to the USDA. Butler said that problem extends to farmers in other countries as well.

“There’s a worldwide surplus of milk. The EU has a terrible surplus,” he said. Additionally, milk prices are at the lowest since 2009, according to the USDA. Also, the price for milk that goes to cheese production isn’t always comparable, which can cause other issues in the market.

But the government has purchased surplus cheese before to supply food banks and welfare programs, according to Butler. In fact, it’s been doing so since at least the 1950s, he said, and there was a notable buyout from the government in the 1981. Hence the phrase, “government cheese.”