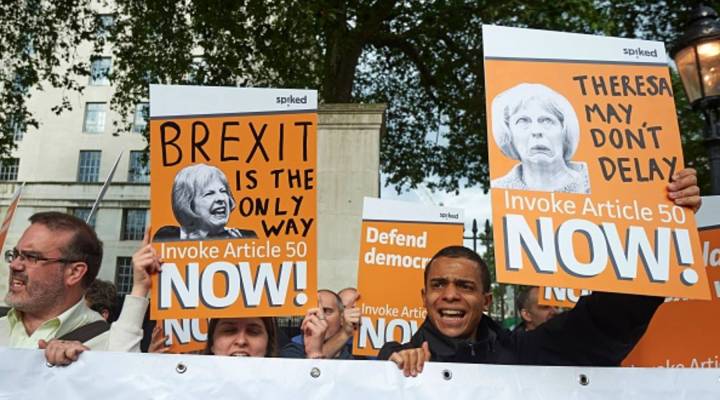 COPY
Pro-Brexit supporters holds up placards as they demonstrate outside Downing street in central London on July 13, 2016, on the day new British Prime Minister Theresa May takes over at number 10. NIKLAS HALLE'N/AFP/Getty Images

Pro-Brexit supporters holds up placards as they demonstrate outside Downing street in central London on July 13, 2016, on the day new British Prime Minister Theresa May takes over at number 10. NIKLAS HALLE'N/AFP/Getty Images
Listen Now

The warnings were dire.  Vote for Brexit and Britain will suffer a disaster, said a whole slew of experts before the referendum . The stock market will crash.  House prices will plummet. Three million people will be thrown onto the dole.

Two months on, none of this has happened. In fact, the opposite has occurred: the stock market has reached new highs, unemployment has sunk to its lowest level for a decade and house prices are stable and retail spending is up.

This benign picture has materialized and the grim scenario has been – so far – averted, partly thanks to the sharp fall in the value of the pound immediately after the referendum result. This has given U.K. exporters a boost, making their products and services cheaper abroad and increasing their profits when their foreign currency revenues are converted into sterling.

Longthorne – a small, British manufacturer of  upmarket shotguns – has been one of the many beneficiaries of this development:

“We’ve just broken into the U.S. market,” said Elaine Stewart, Longthorne’s marketing director. “We got an order last week from an American  customer who rang up and ordered a gun because the pound is very low at the moment and he wants to pay up front as well because the pound is so low which is going to be good for him. We’re expecting quite a few more orders like that,” she said.

Elaine Stewart, Longthorne’s marketing director, says the fallen value of the pound has helped their brand of shotguns break into the U.S. market.

Since the company’s highly crafted, and tailor-made, guns cost up to $50,000 each, the 13 percent decline in the pound against the U.S. dollar represents quite a saving for American purchasers.

The Confederation of British Industry – the country’s  largest employers’ organization – has just reported that the weaker pound has helped propel total U.K. exports to a two year peak.

But it’s too soon for the Brexiters to gloat. Many analysts believe that business sentiment is not as buoyant as some of the numbers might suggest. The problem is uncertainty; it will be two years or more before we know the exact shape of Britain’s new relationship with the EU — its largest market.

Rupert Harrison of the Blackrock investment firm says that lack of clarity will curtail growth: “Many business leaders are likely to say I can’t invest  — yet. I can’t hire that person —yet. I’m just going to wait and see what happens.

A key test of business confidence is the Markit Purchasing Managers’ Index — published last month —showed a steep fall following the referendum, the steepest fall since the global financial crisis seven years ago.

And so Britain does seem headed for a slowdown. But, after two months, the signs are that the economy has not fallen off a cliff as some pro-EU campaigners warned before the vote.