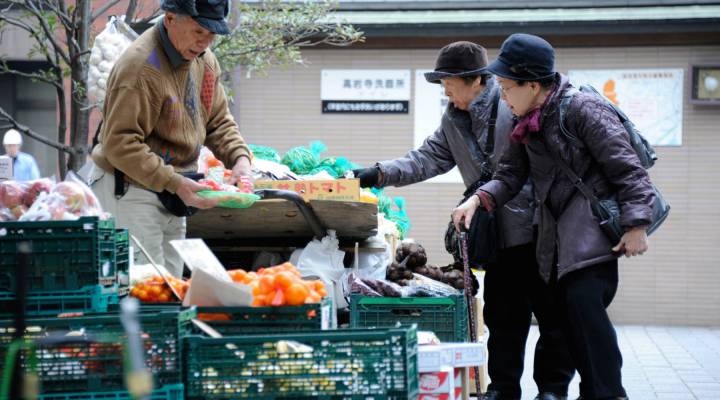 COPY
Elderly women choose vegetables from a vendor at a temple in Tokyo. TORU YAMANAKA/AFP/Getty Images

Some experts say we have what amounts to a “retirement funding crisis” here in the United States. That, given longer lifespans, many retirees aren’t able to get by on savings and Social Security alone.

Well, seniors in Japan are also struggling, and in many cases the situation is much worse.

As of March, people 65 or older now account for more than half of all households living on welfare.

The situation is the result of several pieces of bad news, which economist Matthew Goodman at the Center for Strategic and International Studies describes as the “three Ds.”

“Debt, deflation and demographics,” Goodman said, “and the biggest problem is demographics.”

For every retiree in Japan, there are only four workers paying taxes, Goodman said, and that number is expected to shoot up to four retirees for every five workers by 2060.

“I think we are doing a lot for women employment and pension reform, but for elderly people, we have many more efforts to do,” said Reiko Hayashi, director of Japan’s Institute of Population and Social Security Research.

Hayashi said the solution for both the pension-funding crisis and elder poverty may lie in finding more ways to juice the labor force, including helping older workers stay on the job longer, and thereby maintain a higher level of income.

Hayashi said Japan is bringing in more foreign workers in industries such as health care, while also discussing plans to fund their cratering pension system the old-fashioned way — by increasing taxes.