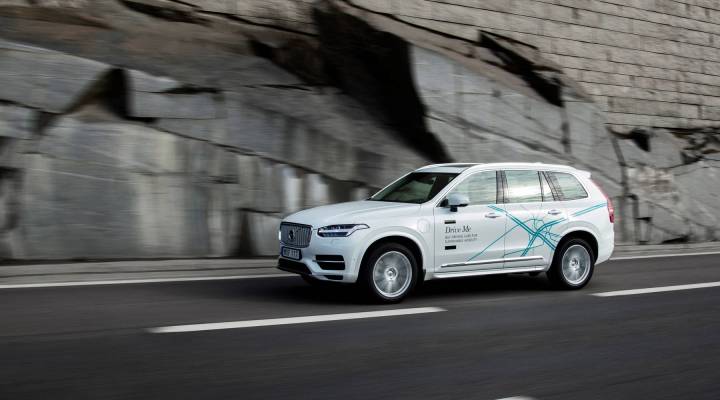 You probably heard the news that Uber plans to start testing autonomous cars in Pittsburgh as soon as the end of the month, using a fleet of semi-autonomous Volvo XC90 vehicles.

That last part came as a tiny surprise to some: Volvo isn’t among the automakers most commonly associated with autonomous cars. Ford, Toyota, Google, Tesla spring to mind a lot more quickly. But Volvo and Uber have a new $300 million deal under which the Swedish carmaker will develop and produce more self-driving cars with Uber.

And as it turns out, Volvo is quietly turning itself into a major player in car tech. In fact, based on a report this week from Business Insider, it’s safe to say that Volvo is looking at trying to use every potential new car technology all at the same time.

Which actually led me to a new, informal Marketplace segment that I’m calling Tech Intervention. As in, stop. Enough, already. You don’t have to do all the tech all at the same time.

Some of Volvo’s advances make sense and fit cleanly into the evolution of the car industry. And Volvo has always been a leader in safety technology. Its pedestrian detection system, which can see walkers or bicyclists and automatically stop the car to avoid hitting them, was skewered after people tested it improperly and ran themselves over. But, it’s legitimately impressive tech with the potential to save lives (or at least limbs).

The company’s Pilot Assist II technology will nearly match Tesla when it launches next year. It will handle steering and braking at speeds up to 80 miles per hour, like Tesla’s autopilot system does now. And Volvo is making important strides toward cleaner operation, electric cars and artificial intelligence to handle autonomous driving.

All that makes sense, although my experience with Volvos is that the safety tech can be a little intrusive (as can many safety systems, which can lead people to turn them off altogether). Carmakers still have to figure out the best way to handle notifying drivers about potential hazards, reminding them to keep their hands on the wheel and driving safely in traffic.

If history is any guide, Volvo will handle this with the subtlety of an aggressive, orange-vested driver’s education teacher. One of the reasons its forward-collision avoidance system is so effective? You can’t turn it off.

But things get a little off the rails with Volvo’s plans to introduce, as soon as next year, a commercial car that doesn’t have a key. At all. It’s unlocked with a smartphone app, and you can share a digital key to let other drivers unlock the car.

That should be fine, as long as by next year we have smartphones whose batteries last an entire day and night of normal living, and as long as we’ve completely solved the problem of mobile phone security. Volvo, are you sure we’re ready for this technology now, and in sensitive commercial fleets?

Business Insider also reports that Volvo might start using Microsoft’s HoloLens augmented-reality headset to let customers shop for cars and try out safety and semi-autonomous features in a sort of head-gear simulator.

Again, that might go just fine, assuming the showroom employees can handle the tech, keep it up and running, and that it works perfectly. Sound likely?

Don’t get me wrong; I like Volvo’s commitment to technology and how it’s improved safety and driving. The results are indisputable. But too much technology risks becoming gimmicky and hard to manage for consumers and dealers. So take a hint from that orange-vested teacher and just slow down a tiny bit. For safety’s sake.