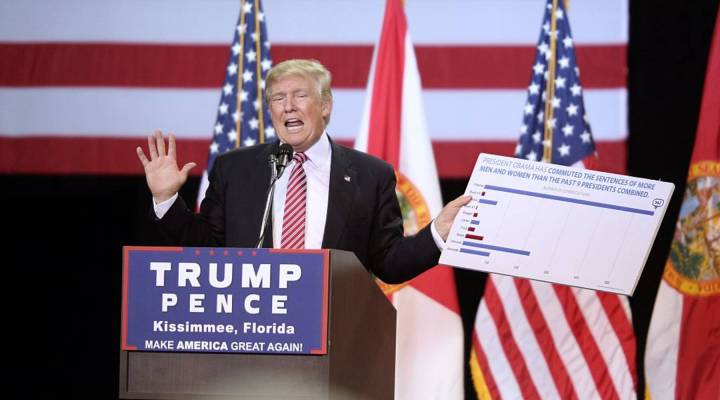 The ad is about two Americas. There’s Hillary Clinton’s America, in which dangerous illegal immigrants mooch off the system, and Trump’s America, in which he touts borders that are safe from dangerous immigrants, refugees and terrorists. The ad is airing in four swing states: Florida, Ohio, Pennsylvania and North Carolina. Local TV stations have been desperate for this.

“It’s been a long and sad summer for local television,” said Ken Goldstein, who teaches politics at the University of San Francisco. “There’s not a lot of original programming, football season hasn’t started yet and there’s typically less demand from regular advertisers.”

That’s why stations love political campaigns. Trump’s ad today cost almost $5 million. Clinton has spent a lot more on ads. But even together, that spending isn’t near what stations expected based on prior elections. And there’s no way to make it up, Goldstein said.

The ad buys stations are really drooling over are from so-called outside groups, including super PACs.

“Sometimes they might be paying five times the normal rate for an ad in Columbus, Ohio, a week before election day,” said Travis Ridout, co-director of political ad tracker Wesleyan Media Project.

TV stations can charge super PACs top dollar. So, come fall, bring on the bidding wars. Then again, Ridout said, before super PACs shell out, they’ll be watching to see how Trump does with his own ads first.