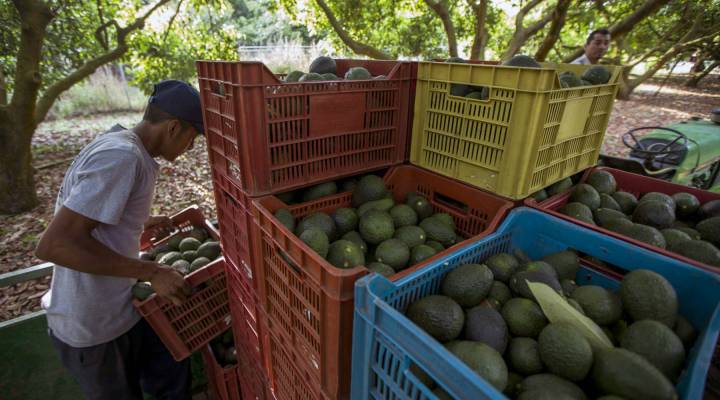 COPY
Men work during the harvest of avocado at an orchard in Uruapan municipality, Michoacán State, Mexico. ENRIQUE CASTRO/AFP/Getty Images

Our collective hunger for guacamole may be fueling environmental destruction. Sky-high avocado prices have some farmers in Mexico planting avocado trees in a way that’s threatening important forestlands and water supplies.

Mark Stevenson, who has been covering the issue for the Associated Press, joined us from Mexico City to talk about the economic factors that are driving all of this.

On demand from China:

The consumer demand for avocados has spiked in recent years just because, whatever the reality is, it’s viewed as a healthy choice. You can see it when you go into the hills in the Western Mexican state of Michoacán. You can often just see these small country, two-lane roads and they’re just sometimes almost bumper-to-bumper with these big farm trucks coming down carrying crates of avocados. And what Mexico has just done is signed a series of agreements with China, which allowed lower tariffs and increased imports of avocados. And that has people somewhat concerned. Demand from the U.S. market has caused disarray before. Imagine what demand from China would do?

On avocado farming’s effects on the environment:

This crop, especially as a cash crop, is just so much more attractive than anything else farmers can plant or do for a living. So you can either continue to preserve your forest or you can sort of start out planting avocado saplings, 20 acres here, 20 acres there.  And these are sensitive forests. They support not only the Monarch Butterfly, but they support an entire range of animals, plant life, and of course the forestry industry there in Michoacán.

The government has recently conducted a series of raids. We’ve seen two of them in which they usually arrive after significant damage has been done to the woodlands. But they’ve seized hundreds of avocado saplings. They’re probably not catching all of it. Farmers have a subtle practice of planting avocado trees under the forest canopy, and then just getting the forest down to let those trees have sunlight. So it’s a stealth practice, but the piecemeal effect cumulatively becomes quite large.