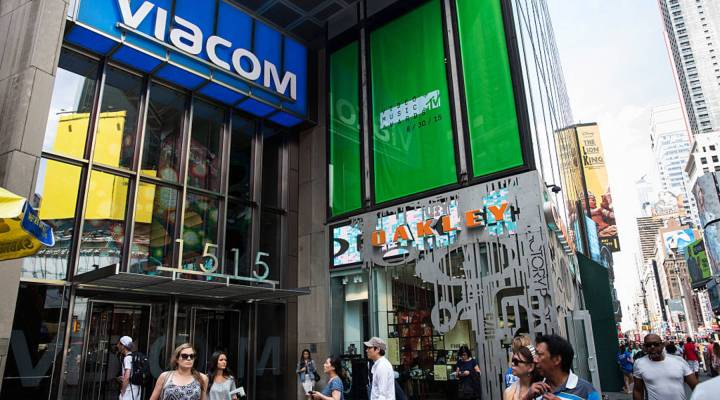 COPY
A sign hangs on the offices of Viacom in Times Square.  Andrew Burton/Getty Images

A sign hangs on the offices of Viacom in Times Square.  Andrew Burton/Getty Images
Listen Now

There is a settlement in the boardroom upheaval at the media behemoth Viacom. The parent company of MTV, Nickleodeon and Paramount Pictures will oust its current CEO in a major victory for majority shareholders Sumner Redstone and his daughter, Shari.

Now onto the real work: turning around Viacom’s underperforming television and film products. A key issue: Viacom’s hit cable TV channels from a previous generation are no longer must-see today.

“Comedy Central’s ratings have struggled, MTV is just not that important on the landscape, same way with VH1,” said Jeff McCall, DePauw University communications professor. “A lot of people that used to watch television are not there any more.”

McCall sees a lack of imagination and creativity in entertainment everywhere, including at film studios like Viacom’s Paramount Pictures.

Issue 2: delivering its entertainment content to TV cord cutters and young people’s mobile devices. Netflix has succeeded, as have legacy providers. HBO’s portal is HBO Now and CBS has CBS All Access.

“A number of different companies have been figuring out a strategy for distributing the content they’re creating for their linear cable or broadcast channels and also making it available by internet distribution,” said Amanda Lotz, University of Michigan media studies professor and author of “The Television Will Be Revolutionized.”

Lotz said it’s not too late for Viacom to figure it out.

But there are questions of whether the firm is governed well. Ninety-three-year-old Sumner Redstone and Shari Redstone own most of the shares and the votes on Viacom decisions. To some, that translates into limited accountability.

“And that means they don’t really suffer the consequences from not managing a company well from a governance level,” said media and internet analyst Brian Wieser at Pivotal Research.

This boardroom shakeup, in fact, consolidates the Redstone family’s control over Viacom.