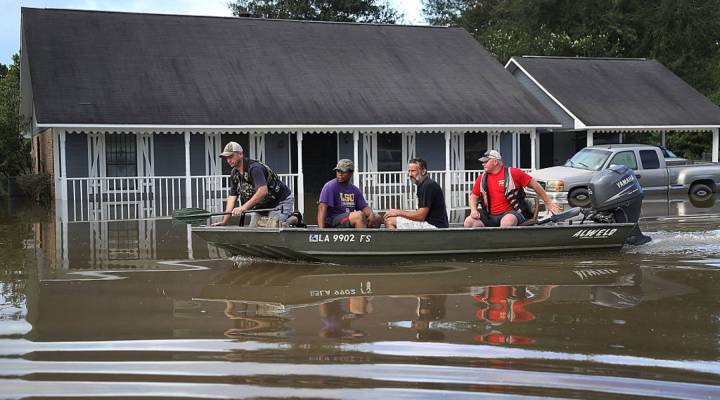 COPY
Record-breaking rains pelted Louisiana over the weekend leaving the city with historic levels of flooding that have caused at least seven deaths and damaged thousands of homes.  Joe Raedle/Getty Images

Record-breaking rains pelted Louisiana over the weekend leaving the city with historic levels of flooding that have caused at least seven deaths and damaged thousands of homes.  Joe Raedle/Getty Images
Listen Now

The White House issued a disaster declaration for 20 parishes in Louisiana following flooding that killed 13 people and damaged an estimated 40,000 homes. Almost half of the people in Louisiana’s high risk flood zones have insurance through the National Flood Insurance Program, and more than 85,000 people have registered for federal disaster aid with FEMA. The problem is, the flood insurance program is billions in debt.

Rafael Lemaitre, spokesperson for FEMA, said despite that, people in Louisiana shouldn’t be worried.

“We expect to pay every claim and every dollar that policy holders are covered for under their policies,” he said.

“It’s a program that’s on fiscally treacherous footing,” he said. “And it’s a program that doesn’t really achieve our national goals for making us better prepared to deal with floods, hurricanes and the types of severe weather that are going to become increasingly common.”

The flood insurance program was set up in the 1960s because private insurance companies didn’t want to assume the risk of people who live on a shoreline or in a flood zone.

Jennifer Wriggins, an insurance specialist at the University of Maine Law School, said Congress didn’t plan for the program to be around this long.

“When Congress passed the program, they passed extensive subsidies and the intent was that those subsidies would last for about 20 years, and they haven’t,” she said. “They’ve lasted for more than 50 years.”

Moore said federal policy should stop encouraging and paying for people to rebuild their homes in flood zones. And lawmakers should make information about flood damage and flood risk readily available to home buyers.

“If I go buy a car, I can pull up a Carfax report and find out every accident it’s been in and what repairs were done,” he said. “For a house, I’m totally reliant on what the homeowner wants to tell me about floods.”

There are bills in Congress to figure out if reauthorizing or revamping the program is the right move. The program is set to expire on September 30, 2017.