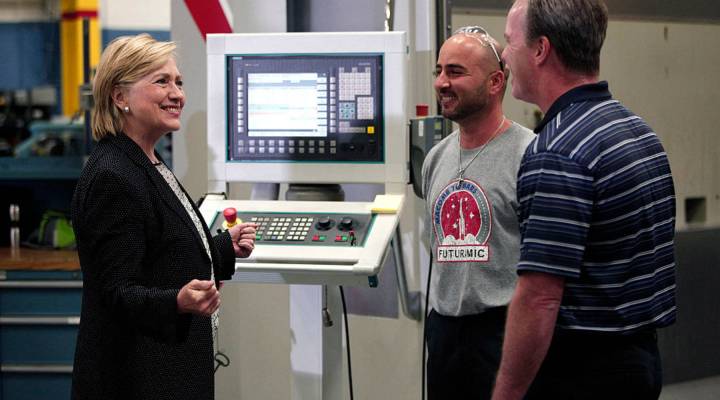 In a recent speech at a manufacturing plant in Michigan, Democratic presidential nominee Hillary Clinton got big applause for this line: “A four-year degree should not be the only path to a good job in America.”

“I actually got a number of emails, which is the equivalent of a high five these days, of course, and some texts,” said Jim Stone, who directs the National Research Center for Career and Technical Education. The center works to improve skills training in high school and beyond.

For a long time, Stone said, skilled trades have been seen as somehow less valuable than white collar jobs. What used to be known as vocational training in high school had a reputation as a dead end track for struggling kids, or for failing to prepare students for in-demand jobs.

But as manufacturers complain about a shortage of skilled workers and many families question the value of an expensive four-year college degree, skills training is getting another look. Secretary Clinton’s remarks on the campaign trail have added to the momentum, Stone said.

“Raising that issue now puts it into the conversation at a much higher level,” he said. “Even though President Obama and state governors and others have talked about this, this gets headlines.”

But changing perceptions, and better connecting training to available job, will take more than headlines.

“Right now and in the next ten years, the largest portion of jobs are going to be in that middle area, the jobs that require more than high school, but less than a four-year degree, but that’s not really how we invest,” said Rachel Unruh, chief of staff at National Skills Coalition, which advocates for more investment in “middle skills” training. Such jobs include elevator repair, radiation therapy and dental hygiene.

“Even though the jobs that require a four-year degree are a much smaller part of the labor market, we invest considerably more resources in preparing people for those jobs,” she said.

More than half of skilled jobs don’t require a college degree, according to the coalition, but only 20 percent of federal Pell grant money supports training for those jobs.

Meanwhile, research has shown that people who earn short-term certificates in fields like computer and information services or mechanical engineering can earn even more than people with bachelor’s degrees.