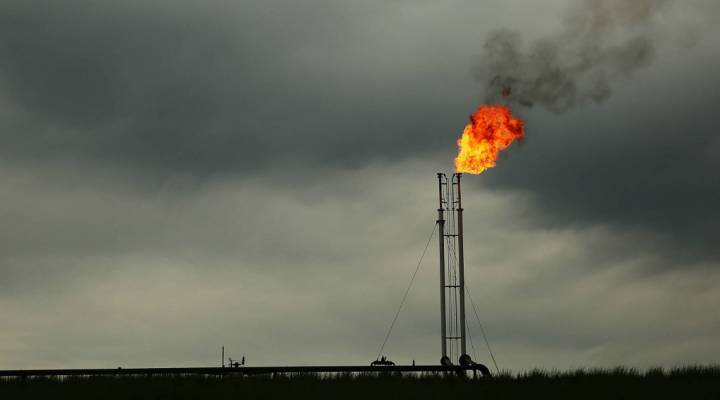 COPY
Natural gas is flared off at a plant outside of the town of Cuero, Texas. The boom in natural gas drilling has led to an increase in the amount of methane emissions.  Spencer Platt/Getty Images

Natural gas is flared off at a plant outside of the town of Cuero, Texas. The boom in natural gas drilling has led to an increase in the amount of methane emissions.  Spencer Platt/Getty Images
Listen Now

Scientists have traced a giant plume of methane, a powerful greenhouse gas, over the Four Corners region of the Southwest to leaks from oil and natural gas fields.

With the boom in natural gas drilling has come a spike in the amount of methane emissions. It is the second-most prevalent greenhouse gas emitted in the United States from human activities, from fossil fuels to farming.

As natural gas makes its journey out of the ground, through pipelines to stovetops, there are leaks everywhere. There’s even a sinister name for them: fugitive methane emissions.

Where do they come from?

“Storage tanks where hatches are left open, valves that malfunction, flanges that aren’t tightened as part of a routine maintenance program,” said Mark Brownstein, vice president of climate and energy at the Environmental Defense Fund.

Natural gas has less carbon emissions than coal, he said. “But it’s not at all clear that in the near term those advantages are going to hold up given what we know about today’s leak rates.”

“Quite possibly that there’s just one place or one processing plant or one well that we need to go to to solve the majority of the leaks,” he said.

That should make an industry fix a lot easier.