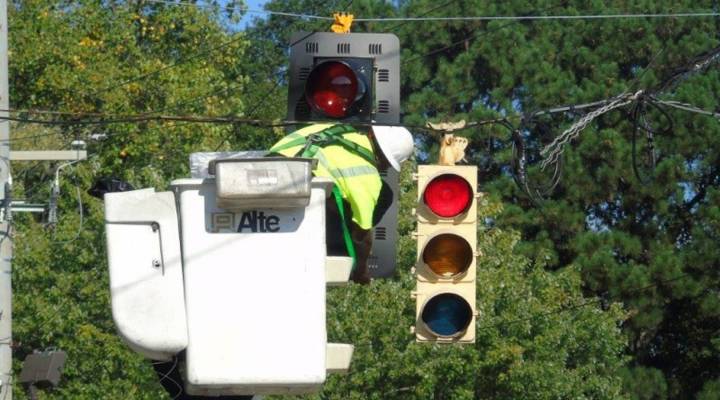 AAA says it costs roughly 57 cents to drive a car one mile, and that number jumps when drivers idle at red lights and crawl through gridlock. City planners nationwide are trying to help by installing new traffic signal technology, and that’s why the City of Atlanta is dropping millions of dollars on a systemwide upgrade.

The whole infrastructure project is called “Renew Atlanta,” and its general manager is Faye DiMassimo. She explains that the traffic signal part of the project doesn’t just mean buying new equipment; it also means making better use of traffic lights.

“Signal optimization simply means that we’re making sure that the timing of the signals is moving traffic through the corridor in an efficient way,” DiMassimo said.

That includes cars – but also bikes and pedestrians.

Last year, Atlanta voters approved $250 million in bonds for the project, and the largest chunk of funds will help modernize old traffic lights.

“The signals really don’t know what’s going on right now,” said Georgia Department of Transportation engineer Kathy Zahul.  She’s talking about lights that will see an upgrade, like those on North Avenue in Atlanta’s midtown area.

The last major systemwide traffic upgrade in Atlanta was for the 1996 Olympics. Zahul said since the technology is old, operators have to manually program the lights on site.  That’s okay for planned events like rush hour, but not unplanned ones like accidents.

When it comes to more advanced uses of the lights, Zahul said, “they probably, based on what’s the age of the signals, couldn’t accept that input.”

She said to think of the signals like cellphones. If you want internet access and the latest apps, you need a smart phone.  And, if you want the latest traffic technology, you need new lights. The problem is the price of each light starts at about $100,000.

At an intersection with North Avenue and one of Atlanta’s many streets named Peachtree, DiMassimo and Zahul explained what the money will buy.

DiMassimo noticed a car running a red light and said, “You’re going to see people not making risky moves, risky turns or speeding up to try to get through the intersection.”

The new lights are supposed to help traffic move in efficient packs with fewer stragglers trying to speed through reds. They’re built to coordinate with cameras and metal detectors to see cars, bikes and pedestrians. They can communicate with each other to prevent backups, and operators should be able to program them remotely.

The lights are in the design phase, but should be ready by September of 2017.