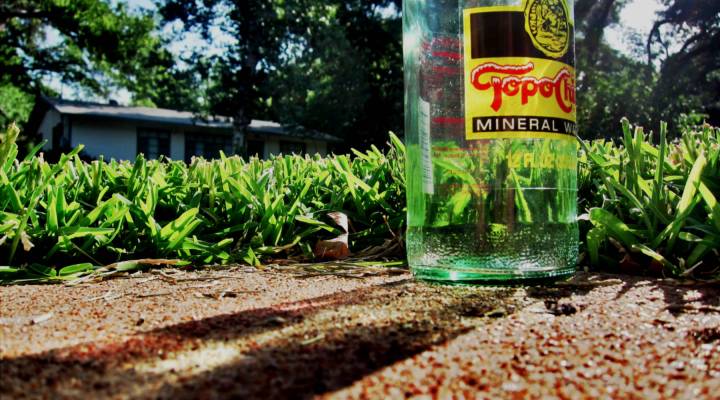 COPY
Topo Chico has been around for more than a century. Nathaniel F/Flickr

Topo Chico has been around for more than a century. Nathaniel F/Flickr
Listen Now

On a hot evening in Austin, Texas, Mark Yawn, the bar manager at eclectic Tex-Mex restaurant Ranch 616, was stocking up on Topo Chico. He said the Mexican sparkling water is one of his most popular non-alcoholic beverages — he’s also a fan of the drink.

“It’s more bubbly…it kinda gets you at the back of the throat sometimes,” Yawn said.

Some Austin bars incorporate Topo Chico into their cocktail menus.

When it comes to sparkling water, Perrier and San Pellegrino likely come to mind. Those European brands have long been go-tos for lovers of fizzy water in the U.S. But this Mexican sparkling water has captured the palates of many in the South, especially in Texas.

The brand is more than 120 years old and has been in the U.S. since the 1980s. But fandom didn’t start until just a few years ago. David de la Garza is Topo Chico’s marketing manager for the U.S. and said the growth in popularity was no accident — the company has had its sights set on the mainstream market for some time.

“It’s something that has been the works for over 30 years now,” De la Garza said.

Originally, Topo Chico sold its products primarily in Hispanic stores. But starting in 2012, the company made its official push into the mainstream market. Over the last year, the company has reported a double-digit growth in sales volume.

So how did Topo Chico do it? Social media has been one element of Topo Chico’s growth strategy. In part, it’s used to tell the brand’s story, which is based on the legend of a sick Aztec princess who was healed by water from a hidden spring outside modern-day Monterrey, Mexico. The brand has been bottling water from the spring since 1895.

But Sharon Schembri, a marketing expert at the University of Texas Rio Grande Valley, said Topo Chico could do more beyond social media to communicate the Aztec legend.

“The little princess picture that they have on the front of their label, I think that can be enhanced,” she said.

Topo Chico also sponsors trendy events like Austin City Limits and Lollapalooza in Chicago. De la Garza said his goal is to broaden the brand’s reach and these events are one way to do it. But he also said it’s important to hold onto Topo Chico’s core Hispanic consumers.

“Within five years we want to be one of the best two imported mineral water brands with the highest market share,” De la Garza said.

But that may be a challenge.

Bill Schmitz, an analyst at Deutsche Bank, said Topo Chico is up against some big players like Perrier, San Pellegrino and LaCroix.

“I think it’d be really hard to try to unseat those guys just given how entrenched those brands are,” Schmitz said.

But so far, this water from south of the Rio Grande has certainly made an impression on Texas.