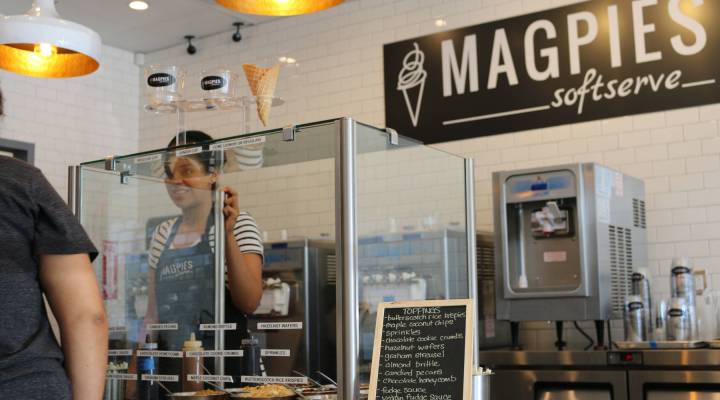 COPY
Rose Schwartz helps a customer at Magpies.  Bridget Bodnar/Marketplace
Brought to You By

Rose and Warren Schwartz both have chef backgrounds but they attribute the idea to opening an artisanal soft serve ice cream shop in Los Angeles to a stop at a Dairy Queen during a family vacation.

“Originally we wanted to open up just hard ice cream, just by scoop,” said Rose Schwartz. “But then we realized in L.A., there’s awesome ice cream everywhere you look. It’s saturated. So we were out on vacation, and we decided to walk into a Dairy Queen just to get some soft serve, and we’re like, no one does chef-flavors, chef-driven soft serve.”

From that initial idea, it took the couple two years to open the doors to Magpies Softserve. Rose spearheaded research and development. Instead of using the traditional pre-made soft serve powdered mixes, Rose and Warren developed their own recipe for the soft serve mixture and flavors like malted milk chocolate, corn almond, peanut butter pretzel and Thai tea.

The trick was to figure out the right ratio of sugar. Rose said she doesn’t like “excessively sweet things” but “sugar acts as the antifreeze in soft serve. If you put too little in there, it’s not going to come out of the machine.”

Rose and Warren enlist family members to help taste-test flavors before they’re rolled out in the shop. One flavor in particular was a surprise success — corn almond.

“We knew we had something,” Warren said, when he offered it to his 5-year-old son.