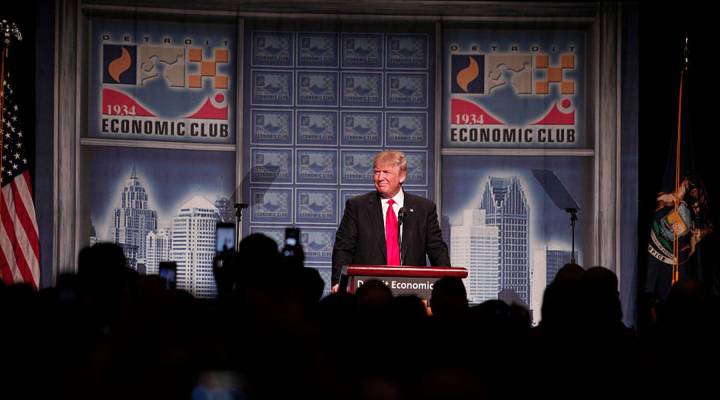 After a controversy-packed couple of weeks, Donald Trump tried to reset at a speech on the economy Monday in Detroit. It was rocky; the Republican nominee was interrupted at least a dozen times by protesters. He was also lighter on specifics then we might have liked, promising to outline more detailed plans later.

So he just said details coming in the next few weeks. I thought this was supposed to be the details speech? Seriously.

But there were some familiar themes. We pulled some key lines from Trump’s remarks, along with some of our reporting on each.

When we were governed by an America First policy, Detroit was booming. Engineers, builders, laborers, shippers and countless others went to work each day, provided for their families, and lived out the American Dream. But for many living in this city, that dream has long ago vanished.

It’s true that Detroit has had a rough decade. Three years after the city declared bankruptcy, about 40 percent of people live below the poverty line — a stat Trump cited in his speech — and foreclosures are still sky-high. Residents who are able to stay in their homes haven’t had it easy either, grappling with the city over mass water shut-offs for falling behind on their payments. Of course, it’s not clear how much, if anything, Detroit’s struggles have to do with Trump’s “America First policy,” a phrase that crops up in the Republican platform. Trump has courted working class voters throughout his campaign. He’s repeatedly invoked plant closures as a symptom of America’s decline and a peril of trade deals — not unlike insurgent outsider Democratic candidate Bernie Sanders.

[Hillary Clinton] supported Bill Clinton’s NAFTA, she supported China’s entrance into the World Trade Organization, she supported the job-killing trade deal with South Korea, and she supports the Trans-Pacific Partnership.

The TPP was also a frequent target of Sanders in his primary campaign against Clinton, and it’s divided both parties, though its economic impact may be muted. NAFTA has long been a target for Trump, who has advocated for high tariffs while saying “who the hell cares if there’s a trade war?” Experts told us a starting a trade war would be “playing with fire,” and it could hinder economic growth.

We will also rebuild our military, and get our allies to pay their fair share for the protection we provide – saving us countless more billions to invest in our own country.

Trump has also said a trade deficit could excuse the U.S. from fulfilling obligations to NATO, indicating a pretty transaction-focused approach to foreign policy.

Tax simplification will be a major feature of the plan. Our current tax code is so burdensome and complex that we waste 9 billion hours a year in tax code compliance. My plan will reduce the current number of brackets from seven to three, and dramatically streamline the process.

This sentiment is in line with the Republican platform, which calls tax reform a “moral imperative.” We dug into Trump’s tax plan — along with Clinton’s, which he criticized in this speech — in our breakdown of the major party platforms.

Today, I will outline my economic vision. In the coming weeks, we will be offering more detail on all of these policies, and the ones we have already rolled out can be viewed on my campaign website.

This phrase cropped up a few times in Trump’s speech, in reference to education reforms, childcare costs, police funding and more. This might be a good time to mention Trump’s economics team. The list of advisers his campaign released Friday, included more businessmen than economists, and no women. We looked at what a business-like approach — something Trump has promised countless times — could mean for his policies.

The Obama-Clinton war on coal has cost Michigan over 50,000 jobs. Hillary Clinton says her plan will “put a lot of coal companies and coal miners out of business.” We will put our coal miners and steel workers back to work.

This came up during the primaries, particularly in West Virginia, where a loss in high-paying jobs has dragged down the economy. Trump’s right about what Clinton said, but experts we talked to said he’s wrong about those jobs coming back.

We will build the next generation of roads, bridges, railways, tunnels, sea ports and airports that our country deserves. American cars will travel the roads, American planes will connect our cities, and American ships will patrol the seas.

Both candidates have pushed infrastructure spending. Clinton has pledged $275 billion over five years, and Trump said he would “at least” double her spend. His projection gets closer filling the country’s infrastructure funding gap, but breaks with typical conservative ideals and his party’s platform.

American steel will send new skyscrapers soaring. We will put new American metal into the spine of this nation.

Another good time to look at Trump’s economic team, which includes Dan DiMicco, a steel exec and author of the book “American Made: Why Making Things Will Return Us To Greatness.”

Trump is emphasizing “American steel” to rebuild American infrastructure. Check out #4 on his new list of advisors. https://t.co/VC7dWAi39l

Our country will reach amazing new heights. All we have to do is stop relying on the tired voices of the past. We can’t fix a rigged system by relying on the people who rigged it in the first place.

This is where Trump wrapped up his speech, and the line likely resonates with many voters. Our Economic Anxiety Index survey found majorities in every ethnic and political group think the economy is rigged in one way or another.