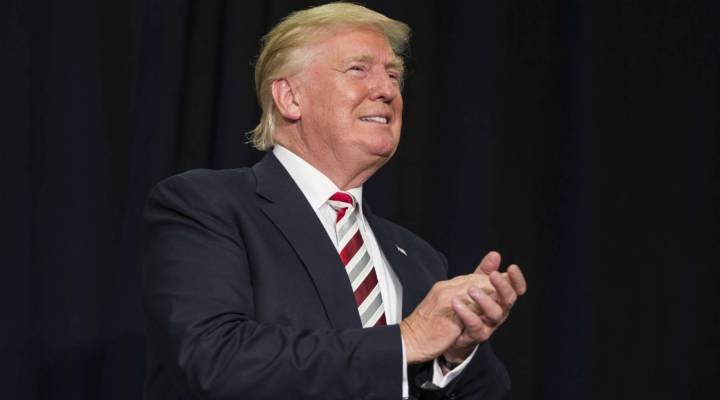 COPY
Donald Trump says he will "be the greatest jobs president that God ever created." Scott Eisen/Getty Images

Donald Trump says he will "be the greatest jobs president that God ever created." Scott Eisen/Getty Images
Listen Now

Republican presidential nominee Donald Trump picked his economic team last week and is in Detroit on Monday outlining his economic policy. It could be a big turn for his campaign.

He’s made an awful lot of promises. Some of them have been pretty lofty.

“I will be the greatest jobs president that God ever created, I tell you that,” he told a crowd when announcing his plans to run for the office.

A lot of his campaign has been about bringing jobs back to America, specifically manufacturing jobs. Chad Moutray, chief economist with the National Association of Manufacturers, said he’s got some specific questions he hopes Trump will answer.

The appeal to manufacturing and blue-collar jobs is likely part of the reason this speech is in Detroit.

Mark Muro, senior fellow at the Brookings Institution, said he thinks the auto industry will be at the front of everyone’s minds.

“The auto industry is booming now in its new form because it’s become a high-tech industry that is dependent on huge R&D investments,” he said.

Muro is curious how Trump plans to build on that.

There’s no denying Trump has some big ideas, but what everybody’s waiting on is how he’s going to carry them out.