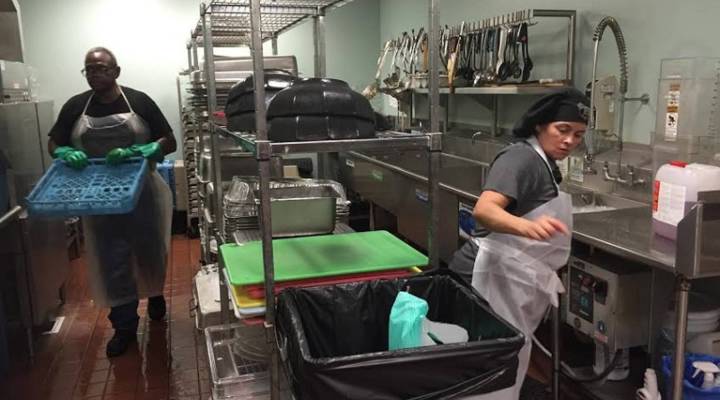 COPY
Workers at the Osceola Council on Aging in Kissimmee clean up after preparing and delivering 1,000 meals to senior citizens in the community. Renata Sago

Workers at the Osceola Council on Aging in Kissimmee clean up after preparing and delivering 1,000 meals to senior citizens in the community. Renata Sago
Listen Now

Cathy Arft’s cubicle is an industrial kitchen at the Osceola Council on Aging in Kissimmee, Florida. In it, she makes sure 1,000 meals are prepared and delivered to the homes of senior citizens. On weekends, she oversees banquet catering that helps pay for the nonprofit’s meal program.

Her schedule is hectic.

Arft started at the agency as a volunteer when she was 12 years old. Today at 50, she calls what she does a labor of love at a place with a critical mission: To serve as many people in need as possible — from in-home personal care for the disabled to respite care and adult day care services.

But come December, the council and mission-based nonprofits like it will have to track that. It used to be if workers made $23,660, then they were exempt from overtime pay. The federal government’s new salary threshold for overtime pay has nearly doubled to $47,476. In an industry where fundraising is king and long hours queen, nonprofit administrators are scrambling to figure out how they’ll comply with the new law.

“We have approximately 40 employees that right now are exempt. And with the changes, that will change to only approximately 10,” said Michele Bronson, who handles human resources at the Council on Aging. With an $8 million annual budget that funds services for 164,000 clients, Bronson said compliance is going to mean making some tough decisions about which employees, from case managers to grant writers, will receive a raise.

“The people who work here full time need to work full time. Either we pay overtime for all of those hours, we hire someone else to do that part, which costs money, or look at doing the increase in the salary so we won’t have to have this person go non-exempt,” she said.

Bronson has started asking employees log their hours, from when they are taking sporadic phone calls or checking email to when they are taking files home. With that data, she will analyze whether it’s worth paying overtime or coming up with creative incentives like flex time.

David Thompson with the National Council of Nonprofits said it doesn’t take much analysis to see this new law will put nonprofits across the country in hard place.

In a recent national survey, he found many nonprofits are bracing to pay overtime.

But national workers’ rights groups like Jobs With Justice, also a nonprofit, point out one thing that they say is worse: employee burnout.

“That leads to turnover. That leads to people leaving,” said Michael Wasser, a labor policy analyst for the organization. “For many nonprofits, it’s the people who work for them that are their value add, and making sure that they can go home and recharge can have long-term sustaining benefits, because you don’t have to go out and recruit, train up, rebuild that knowledge.”

For Mark Neuberger, employment attorney at Foley & Lardner LLP, both nonprofits and for-profits have to adapt to changes in the workforce. It’s not what it was back in the 1930s.

“The law was passed at a time when men — and I mean men — went to work, and if the man wore a white shirt, they didn’t get overtime. And if they wore a blue shirt, they punched the clock and got overtime. Life today is not nearly so simple,” he said.

His biggest advice for nonprofits is to do what they do best: Get creative.