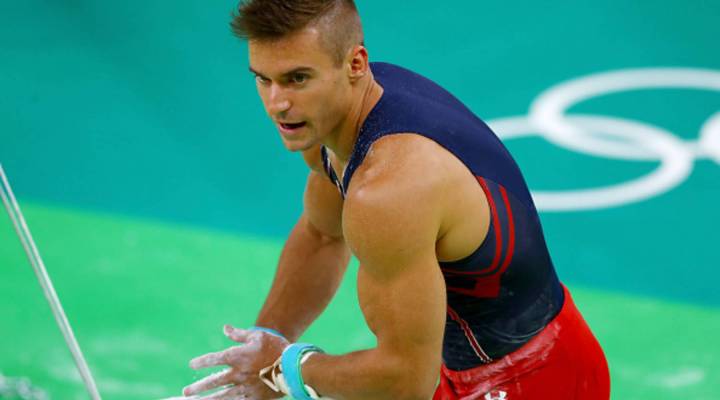 COPY
Sam Mikulak of the United States prepares for the rings during a training session before the start of the Summer Olympic games at Rio Olympic Arena on August 3, 2016 in Rio de Janeiro, Brazil.  (Photo by Getty Images/Getty Images)

Sam Mikulak of the United States prepares for the rings during a training session before the start of the Summer Olympic games at Rio Olympic Arena on August 3, 2016 in Rio de Janeiro, Brazil.  (Photo by Getty Images/Getty Images)
Listen Now

Sam Mikulak has been getting ready for the Olympics since he was two years old. The gymnast made his way to London in 2012 and now, the 23-year-old is back for another Olympics in  Rio. In the past four years, Mikulak has stood out. He won four back-to-back all-around national championships and cruised through the Olympic trials earlier this summer. Mikulak joined Marketplace Weekend to take the Marketplace Quiz.

Sam Mikulak of the United States takes his turn on the floor during a training session before the start of the Summer Olympic games at Rio Olympic Arena on August 3, 2016 in Rio de Janeiro, Brazil.

Fill in the blank: Money can’t buy you happiness, but it can buy you…

Toys. Right now I’ve got an obsession with Pokemon and Legos.  And bubbles, actually. And street chalk.

What do you do with that stuff?

I don’t know, I just want to be a kid again, kind of thing. So it’s like, just going back to my childhood days, and making sure that I’m having fun. With how much stress I have every day in the gym, you need a little time to get out and just be whoever you want to be.

Oooh, I would probably do beach volleyball. Even though it’s a sport, I feel like I can’t steer away from athletics. But I’m just too short in this life and I’m hoping in my next one I’ll be taller.

I bought a Fitbit actually, and I just thought it was going to be an awesome way to track how I live, and move, and burn calories, but with gymnastics it was a total waste of money because it’s more based off how you walk and not how you flip.

When did you realize gymnastics could be your career?

The first time I  won a medal in the all-around competition is when I realized that’s what I wanted to do pretty much for the rest of my life. Even though I was still doing baseball and soccer at the time, I think I just found that that was more my passion, where I saw a lot more success…I was probably eight or nine years old.

That’s so young, did you know already that it was something you could make money doing?

It wasn’t about money, ever, especially when you’re nine years old, it’s all about what you find is more fun and where your passion lies.

My most prized possession is my pillow. I can’t travel or sleep without it.  And it’s like this really thin, down pillow that really doesn’t do anything, but it’s weird, if I don’t have it, I’m constantly thinking about not having it.

My next question for you is ‘what was your first job?’, but you’ve been doing this since you were two, have you ever had another job?

Nope, nope, this has been my one and only.

Something everyone should own…in a way, I think the only thing you should own is a toothbrush. That seems to be, like, the one necessity that you should never go without.

Do you remember the first thing you bought with money that you made as a gymnast?

I’ve just been saving my money quite a bit. I want to open up a gym in Southern California so that I can train there for the next four years of my life. Pretty much everything I’m making want to just kinda put in my bank and hopefully make that dream come true.

What’s the hardest part of your job that no one knows about?

The hardest part  is…you know, we do a lot of conditioning, we do a lot of routines that are endurance, but I think it’s growing your willpower which is really the hardest part, and pushing yourself beyond your own expectations and the expectations of everyone around you, and making sure that you’re the first one in the gym and the last one out, and that you can go to a competition, and you can look back and say that you’ve done everything in your power to be as good as you can for this one moment.